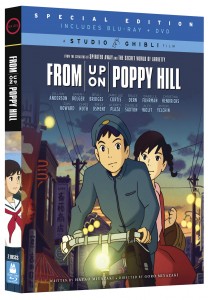 First shown in Japanese theatres in 2011, and then American theatres earlier this year, From Up on Poppy Hill is the latest in the Studio Ghibli collection to receive an American home video release. Adapted from Tetsuro Sayama’s manga, the movie marks Goro Miyazaki’s second directorial effort (Tales from Earthsea), with famed father Hayao Miyazaki providing the screenplay along with Keiko Niwa.

While From Up on Poppy Hill eschews the more fantastical nature of Ghibli titles such as Howl’s Moving Castle or Spirited Away, it falls right in line with their more realistic dramas, such as Whisper of the Heart. From Up on Poppy Hill is a tale of a youth set in 1960s Japan, where the echoes of past wars are still evident. Tokyo has received the bid for the 1964 Olympic Games and must make way for new buildings in order to accommodate the upcoming festivities. One such building that stands in the way is a student clubhouse known as “The Latin Quarter”, where the student government, the school newspaper, and other extracurriculars are housed. 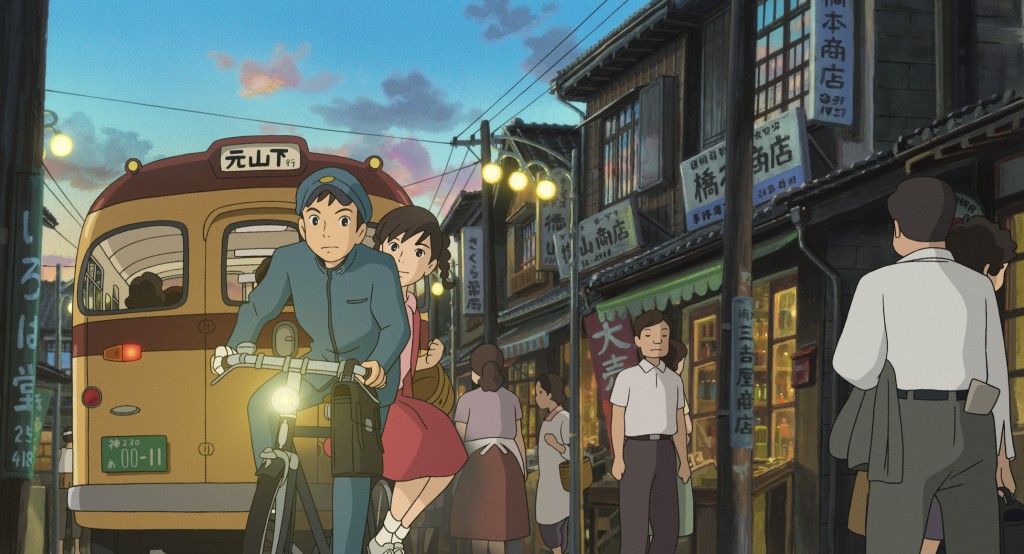 One day, a boy named Shun, who heads the student-run newspaper, publishes a poem about a girl who raises a flag every day by her house on a hill. When Umi, the aforementioned girl, meets Shun, the two share an unspoken, budding romance which ever-so-slowly grows as the two work side-by-side to try and save The Latin Quarter from demolition. With the help of a number of other students, they manage to clean up their clubhouse, but sprucing up the building is not enough to reverse the order for its destruction. Meanwhile, Shun and Umi’s romance also takes a tumble when the two begin to learn more about each other and their families. As a result, the two are forced to try and salvage their connection and their clubhouse, which while not wholly original, is still presented in a way that is quite compelling.

While doing her best to save the day, Umi is also the acting head of her household and must care for her younger siblings. Her father lost his life in the Korean War, and her mother is abroad in the United States, leaving Umi to perform the majority of the domestic duties for her siblings and grandmother. While Umi and Shun begin to grow as characters through their relationship, it is the aforementioned threat to that relationship that truly pushes them both forward and draws you in. You can’t help but empathize with their struggles and celebrate their triumphs. No matter how she grows though, Umi never really loses her sense of duty to her family as she manages to maintain her role as caretaker for her family, despite the other chaos that happens in her life.

The English voice cast features several big names including Jamie Lee Curtis, Gillian Anderson, Beau Bridges and Aubrey Plaza. The Japanese cast features Masami Nagasawa (Touch), Jun Fubuki (Tales from Earthsea) and Junichi Okada (Tiger & Dragon). Both casts put in a very strong performance, as has come to be expected from Studio Ghibli films. In both tracks, they manage to draw out the highs and the lows of each situation. Of course, Satoshi Takebe’s soundtrack and Aoi Teshima’s singing certainly do their part, as well. 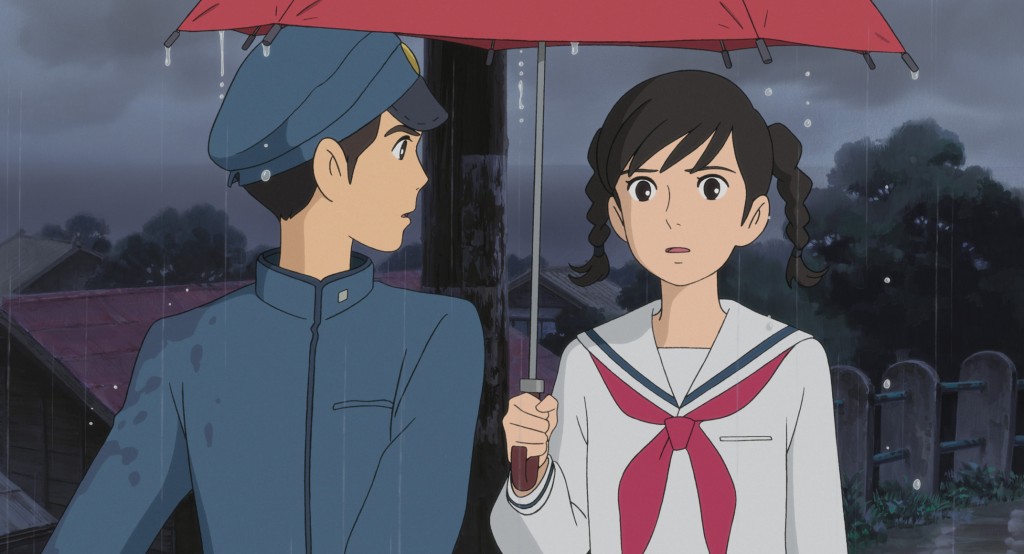 Without all of the fantastic creatures and settings, From Up on Poppy Hill‘s design, like its plot, is a bit more subdued. Nonetheless, it is still quite beautiful. The backgrounds and character designs manage to capture the era quite well, but at times, the two do not blend together as smoothly as one might hope. The result, while not as crisp as some in Studio Ghibli’s portfolio, is still far beyond most other studios.

The home release also features three hours of on-disc extras including storyboards for the movie, a video featuring interviews with the voice cast, an interview with director Goro Miyazaki, and a music video for the movie’s theme “Sayonara no Natsu ~Kokuriko-zaka kara~”, sung by Aoi Teshima.

In all, while From Up on Poppy Hill isn’t your “traditional” Ghibli film, the characters, story, and art all come together to spin an engrossing and wonderful tale. Goro Miyazaki clearly learned some lessons after his struggles with Tales from Earthsea and carried that knowledge with him in bringing this adaptation to the screen.

Full Disclosure: This film was reviewed using a copy provided by Gkids and Cinedigm.