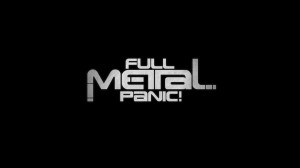 Full Metal Panic! mixes high school romantic comedy with giant robot battles. The anime is based on the light novel series written by Shoji Gatoh and illustrated by Shikidouji. The anime series first came to North America courtesy of ADV Films in 2003, but after the closing of ADV’s studios, FUNimation obtained the rights to the series and began releasing remastered Blu-ray versions.

Full Metal Panic! centers around the life of teenage mercenary Sergeant Sousuke Sagara, a member of the independent force known as MITHRIL. Sousuke has been fighting to protect himself and others since childhood, but his new assignment might be more than he can handle. He, along with a few other soldiers are assigned to protect Kaname Chidori, the daughter of a Japanese diplomat. With Sergeant Major Melissa Mao and Sergeant Kurz Weber watching from the sidelines, Sousuke’s job is to integrate himself into her school without her knowing he’s not just a transfer student. Unfortunately for him, fighting against terrorists doesn’t give a kid much chance to develop socially, and Sousuke’s eccentric personality sticks out like a sore thumb. But why would a mercenary group like MITHRIL take interest in a regular high school girl? Because she’s not just an ordinary high school girl, of course. Kaname Chidori is one of the “Whispered,” a group of people who have knowledge of advanced technology buried deep within their subconscious minds. MITHRIL is there to prevent any other organization from getting hold of her and stealing the information inside her.

The world of Full Metal Panic! is an alternate version of Earth. Though the series takes place in 1998, the Cold War Era still endures. The Soviet Union is still one large force, but China has split into two halves. The secrets found within the minds of the Whispered are the root of much of the world’s current military technology including giant robots known as Arm Slaves. However, civilian life is more-or-less a mirror of what you’d expect to see here. The series mixes together the everyday lives of some of the students with scenes of Sousuke and his comrades in battle against Gauron, a seemingly indestructible madman out to get any Whispered he can, and other Arm Slave wielding terrorists. 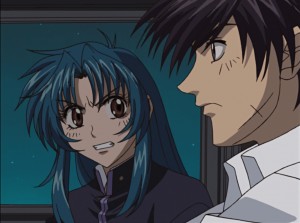 The characters are the key to what makes this series fun. Sousuke’s fumbling, socially-awkward style constantly draws the ire of his classmates and gets him into far more trouble than he expects. When he’s not saying the wrong thing to Kaname and her friends, he’s setting off smoke bombs to steal paper from the copy room or breaking into the girl’s locker room with gun drawn. He’s so out of his depth it’s painful, and yet somehow he still manages to win over his classmates in the long run. On the outside, Sergeant Weber is the complete opposite of Sousuke; he’s a flashy, chauvinistic braggart, but deep down, he’s loyal to a fault. It’s no wonder Mao drinks as much as she does, having to keep these two from getting themselves in trouble. The only really implausible character is Captain Teletha Testarossa, a teenage genius whose level of clumsiness is only equaled by her earnestness.  Gauron, the mastermind behind virtually all of their problems, captures the essence of “crazy like a fox.” He’s equally adept at playing chess with MITHRIL’s forces as he is at bull-charging them, making him a very difficult adversary for them to plan for.

At school, Sousuke must contend with Kaname’s tsundere personality which can be bad enough at times that he misses the battlefield. She’s class president, member of the softball team, and consistently one of the top ranking students. She seems like an ideal girl, but she has a vicious temper and she’s not afraid to show it to Sousuke. She’s also always accompanied by her best friend Kyoko whose whole job in the series, as far as I can tell, is to annoy the crap out of the audience. Everyone knows that one person in your circle of friends that seems nice but just gets under your skin for some reason, and in this show, that person is her.

The Japanese version of the audio is stereo only, but the English is presented in 5.1 surround. Overall, the sound quality is very good, but not amazing. Sousuke and Kaname’s English voice actors (Chris Patton and Luci Christian) do a solid job as does Mike MacRae, the voice of Gauron. However, past that some of the voices get tiresome after a while. Vic Mignogna goes a little over the top as Kurz, who is already an over the top character to begin with, and Kyoko (Monica Rial) has such a high, nasal voice, it’s almost painful to listen to. Luckily, there are large block of time where Kyoko is nowhere to be found. The Japanese voice acting is generally solid, but there are a few voices that don’t completely fit the characters. The show features only one opening (“Tomorrow”) and ending (“Karenai Hana”) song for the whole series, and both are sung by Mikuni Shimokawa. They both fit the pop feel of anime music that came out in the early 2000’s, and Tomorrow is one of my favorite opening songs of all time. 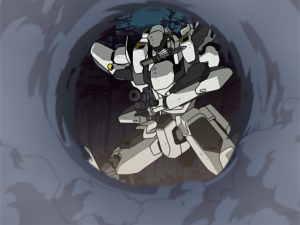 Visually, the remastered Blu-rays look fantastic for a show that was originally animated almost 10 years ago. The video quality has been upscaled without artifact or frame issues, but it maintains the original 1.33:1 aspect ratio; so, there are black boxes on the sides for those with widescreen TVs. Some of the CG that is used looks a little dated at times, but that is to be expected. Gonzo has been known as a pretty solid animation studio, and though this is one of their early works, it has held up well.

The Remastered version of Full Metal Panic! spans 3 discs and includes clean opening and ending videos as well as some production sketches. As an added bonus, all of the Japanese piracy warnings are included on the discs, with a different one for each main character.

If you’re a long-time fan of the series and want a high quality version, this is definitely worth the investment. If you haven’t seen the series, but enjoy a little high school humor in your mecha battles, this should be a strong buy for you, too.