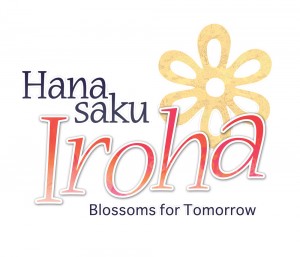 At age 16, Ohana Matsumae is sent away by her mother. After doing all the cooking, cleaning and general support around the house, she’s thanked by being shuffled of so that her mother can elope. On top of that, her closest friend declares his love for her just before she leaves. She arrives as Kissuiso, a traditional hot springs inn owned by her grandmother, given a chance to find herself, but upon her arrival, Ohana is promptly greeted on less than pleasant terms. Her grandmother, upon finally meeting her tells her that she’s not her granddaughter, just the daughter of her estranged child. Instead of a warm and loving welcome, she’s quickly put to work in order to earn her place to stay. So goes Ohana’s life in the story of Hanasaku Iroha.

Fortunately, there are two other high school girls at the inn for her to meet. Unfortunately, they don’t seem to get off on the right foot either, and things progress from bad to worse for Ohana throughout the first episode. But so begins the trials of a young girl learning the ways of running an inn. Ohana doesn’t let the situation keep her down too long as she learns how to work with others at the inn and gets to know her classmates, too. Ohana is the type to fire off half-cocked, but her earnestness is enough to save the day, but even so, Ohana is forced to learn a few tough lessons along the way. While Hanasaku Iroha definitely sets itself up to be very dramatic at times, it slowly transitions into more of a slice-of-life series revolving around the girls of the ryokan, and breathes a little comedic relief into the storyline as a result. The show also mixes in a little bit of fanservice here and there, and while it’s not over the top, at times it does toe the line. The scene where young Ohana ends up involved in helping a customer practice his shibari, especially sticks out as strange. But even that scene, which had all the chance to go over the top, ended without getting tasteless, an impressive feat. Ohana’s family and their drama, which never completely left, return to front and center as volume one draws to a close. The first thirteen episodes tie many things up, even though volume two is still due out in July. 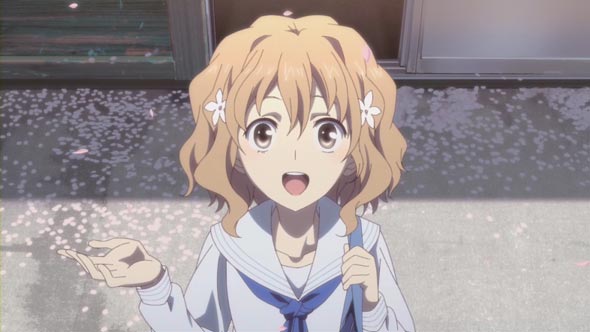 Unlike most contemporary anime, Hanasaku Iroha isn’t just an adaptation of a manga or light novel series. Instead, P.A. Works breathed life into these characters themselves, creating believable, realistic and flawed characters that do a fair job of evoking emotions. From Ohana’s impulsive mother to the bitter and socially awkward Minchi, each character has their failings, and Ohana ends up head-to-head with many of them in the first volume, sometimes intentionally, sometimes not. She’s not always entirely successful, though even her marginal victories could be celebrated – when someone tells you to die the first few times you meet them, even a downgrade to being called “hot vit lon” is a step in the right direction. Thanks to Ohana’s efforts, many of the characters start to treat each other better, and Ohana starts to realize her own flaws in the process. Ohana, like almost everyone at the inn, works hard, but she doesn’t always think about the end result, and this is the source of many of her problems. She has a quirky personality, exemplified best by her turning the name of the local festival name “Bonbori” into a verb, which in English is translated as “festing it up.” Don’t worry, the phrase confuses the other characters in the story, too.

Her voice actress, Kanae Itou, captures a lot of this in her performance, too. Between the above average voice acting and the diverse background track, the show’s sound never gets stale.The music behind “Hana no Iro,” the series’ opening track is great, but the song might be even better if Nano Ripe’s lead singer, Kimiko, was not quite so nasal, especially on the high notes. Even so, the song still manages to be catchy. The ending song, “Hazy” by Sphere is also pretty good. While slower and not quite as catchy, it could easily slip into rotation on a J-pop playlist. During the episodes, the show opts for a mix of background music and a lot of ambient noise such as the ticking of clocks and the sound of rain. Hanasaku Iroha also uses periods of dead silence to a nice result, something that not a lot of shows manage. 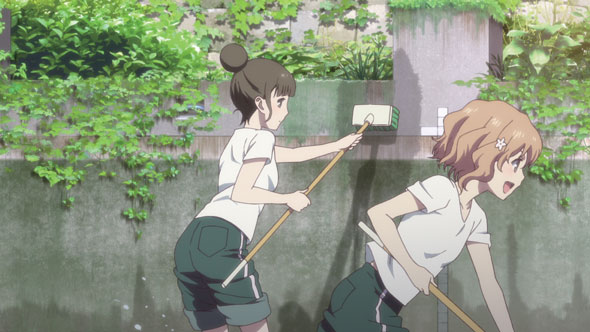 The series’ animation and character designs are also quite good. Unlike the cookie-cutter character designs seen in many series, Ohana was given wavy hair and other little details that make her stand apart visually. The characters also benefit from having eyes that manage to be quite expressive without becoming a joke. But perhaps what sets Hanasaku Iroha apart visually, are the backgrounds. The animation staff crafted some beautiful scenery based on the area around Kanazawa, Japan, and the various backgrounds can been seen in the premium edition’s art book, too. The interview with the art director Kazuki Higashiji that is also included further underscores how much time and effort was put into creating the settings for the show.

Overall, Hanasaku Iroha manages to do a lot of things right. The characters are compelling, though the story does lose some steam during the more slice-of-life portions. And while the series does manage to tie some of the story threads up in the first 13 episodes, there are still some questions that need to be answered. Will Ohana patch things up with her mother? With her best friend back in Tokyo?