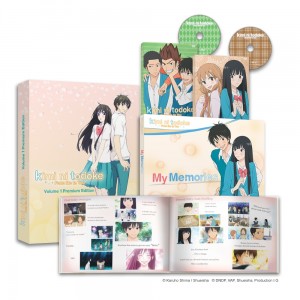 Sawako Kuronuma is known at school for being able to see ghosts and cast curses, or at least that’s what the rumors say. While she’s a very kind girl at heart, her appearance and lack of social graces cause her all sorts of problems. All her classmates avoid her and call her Sadako, like the girl from the Japanese version of The Ring, due to their similar appearances, with one of her schoolmates even telling her that she looks “like a medusa” when she smiles. That is, until one day Shota Kazehaya, the most popular guy in class, decides to say hello to her. Then, a couple of girls named Ayane Yano and Chizuru Yoshida decide to give her a chance, even asking her to help scare their classmates. Such a simple act of kindness sets off a series of events that gives Sawako hope that she might not be alone forever.

Sawako and Kazehaya start to develop feelings for each other, but neither can bring themselves to say it aloud. Unfortunately, just when she thinks that her life is starting to go right, someone seizes the chance to ruin her happiness by spreading rumors that she is talking trash about her classmates. When confronted, Sawako’s lack of straightforwardness and self-confidence ends up putting her newfound friendships on the rocks. Of course, there’s more than one person in the school that wants to keep her away from Kazehaya, and some are better schemers than others.

The first volume of kimi ni todoke: From Me to You covers twelve episodes, and does a solid job of developing a handful of cast members. Over the first half of the season, Sawako manages to develop herself socially, but still has plenty of naivete to spare. As many dramas do, kimi ni todoke does move slowly at times; so, unless you enjoy the genre, you might find yourself irritated. The show has quite a few subplots running between the characters, but almost none of them are resolved by the end of volume one. The show does do a good job of mixing in some humor to keep things interesting, otherwise, this series could get incredibly boring. The volume ends in a bit of a cliffhanger, but I suspect that this isn’t the last time someone tries to drive a wedge between Sawako and her friends.

kimi ni todoke puts a lot of energy into character development. After twelve episodes, the show has done a good job of introducing Sawako, and it’s also done well with many of the supporting characters. Sawako’s two closest classmates Yano and Yoshida actually manage to steal the spotlight a bit from the budding couple. Yoshida is a tomboy who talks and acts like a bancho at times, boasting about how many people she beat up, but whenever she see Sawako be so earnest, she can’t help but cry a little. Yano, on the other hand, seems a bit more worldly and knows how people work. She enjoys teasing Sawako, even when the jokes and insinuations go right over her head. Kazehaya and other characters have received some development as well, but those two really stand out. 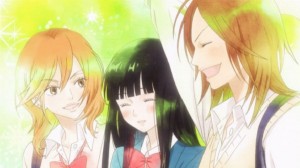 The character designs are fairly realistic, avoiding the anime tropes of bright, blue hair or strange eye colors, and the show has a very soft feel to the art style most of the time. The backgrounds are typically very bright and cheerful, which makes the juxtaposition all that much stronger when Sawako is depicted with grey or dark blue backgrounds as she constantly fails socially. The artwork is solid, but not breathtaking, and the characters, especially Sawako, will frequently exchange their normal facial expressions for flat, underdetailed ones to help emphasize their reactions. The show does pan over single cels of animation during dialogue a little more often than it should, but with the pacing of the show, the animators can get away with it a little.

The show has been released only with Japanese voice acting and English subtitles, which may deter some fans. The cast features some very good Japanese voice actors and actresses including Mamiko Noto and Aya Hirano, and all of the characters do a great job. The opening theme “kimi ni todoke” by Tomofumi Tanizawa is a nice soft rock song befitting the atmosphere of the show. The ending “kataomoi” by Chara is also pretty slow, but the quality of her voice may turn some people off. The music during the show is done by S.E.N.S, who also did the score of xxxHolic among other shows. It’s pleasant to listen to, which makes it unfortunate that it’s almost unnoticeable at times. It is ambient enough that it fades right into the background of some scenes, which could be a good or bad thing, depending on your preferences.

As with all of NIS America’s premium edition anime, it comes with a hardbound art book. This one, entitled “My Memories,” is designed to be a scrapbook or picture diary from Sawako. It mixes pictures of the show’s settings with screenshots from the anime itself plus some short character profiles. Interspersed between the screenshots from each episode are some short quotes and thoughts from Sawako about the events from that episode. The premium edition also comes with both DVD and Blu-ray disc formats, which is a nice option to have for yourself, or lets you share with a friend.

Overall, a show like kimi ni todoke: From Me to You is great for fans of the genre, but volume one of this series probably won’t wow anyone who isn’t at least tangentially interested already. It’s a great show for anime fans who like drama and slice of life series, having a solid story and nice character development thus far, but it definitely doesn’t have enough action to draw in hardcore shonen anime fans. If you’re impatient and want quick resolutions in your shows, this one isn’t for you, but if you enjoy watching characters and relationships develop, you should grab kimi ni todoke. The writing and art style hit their mark as a shojo drama, and volume two should do the same when it comes out in April.

Disclosure: This series was screened using a review copy sent from NIS America.