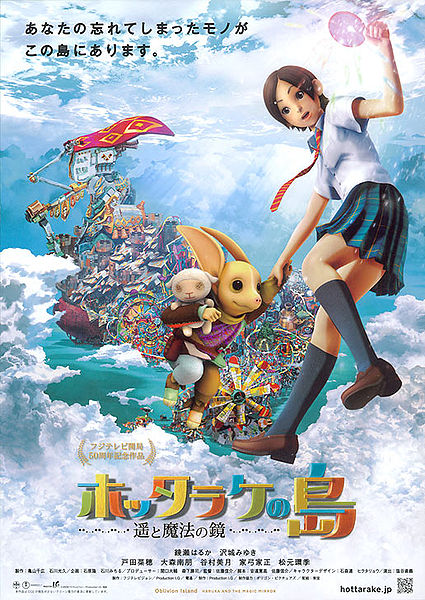 People attach meaning to even the littlest of things: a pebble that you find, or a puzzle that you finished as a kid, or an old crayon drawing. As we grow older, these things might lose their symbolism and just plain get lost. But where do these things go? In Oblivion Island: Haruka and the Magic Mirror, Haruka’s mother tells her a story that says foxes take the things that people neglect and use them to make their underground city. A few years later, Haruka is a bitter sixteen year old girl after her mother’s death. She sets out to ask the god Inari to help her find the hand mirror that her mother gave her when she was a child, but instead chases a fox-like creature to an underground city made out of neglected items. It’s there that she learns that her hand mirror serves a larger and more sinister purpose.

Oblivion Island: Haruka and the Magic Mirror is Funimation’s newest addition to their translated movies. It was directed by Shinsuke Sato to celebrate Fuji TV’s 50th anniversary, and it was picked up by Funimation for English translation through GKIDS.

Oblivion Island is a beautiful movie. Colors call out from every part of the film. The 3D people look elegant and natural but have moments where they step into the Uncanny Valley. Foxes and goblins, on the other hand, have a sort of ugly-cute quality to them that comes through wonderfully in the animation. Also, for 3D animation, this movie doesn’t take a lot of risks, even safe ones. For example, the film makes use of mostly flat surfaces, with even human hair animated as one piece instead of individual strands. The result leaves people looking a bit flat for a 2012 3D animated film.

Character development in Oblivion Island is sparse. Haruka develops as a character, starting as a sullen teenager and slowly showing her emotional side as the movie reaches its conclusion. However, she’s the only character that develops, pushing everyone else to the side. All the other characters feel like pieces to push the plot forward or show off more of Haruka’s personality facets, which is a waste of a perfectly good cast. The character interactions seem realistic up until the end, when the movie is rushing to tie up all the loose ends.

Despite the rushed character interactions, the plot is well paced and pert. It recognizes what little time it has, tells you the story, and gets you from plot point A to plot point B without useless filler or overwrought distractions. It also knows its story very well and therefore uses plot twists at the right time, making every twist and turn seem important and coherent. Because of the speed at which the film relays the story, there are holes in the plot that make the story seem disjointed. Why does Haruka need her mother’s mirror now of all times, for example? How do the mirrors work in the underground city? Why is there syrup running underneath the caverns?  “Just go with it,”  the movie seems to say, but the gaps in the film tend to nag at you. The movie never seems to slow down at times, either. There’s never really a chance to relate to a character or feel bad for them because something else comes along and interrupts the scene and whatever emotions that the scene was trying to instill in the audience. Even when something shocking happens, or a character says that something is scary or dangerous, it usually turns out to be either friendly or so ridiculous that you can’t take it seriously.

The music is orchestral and loud, with billowing sweeps of trumpets and drums. It fits well with a film full of chase scenes and dramatic realizations. Despite the soundtrack being vociferous, it manages to realize when to tone down the louder stuff so that the more emotional scenes shine through. The movie was completely charming throughout, but it doesn’t need to last an hour and thirty minutes. Also, the message of the movie gets lost in the middle of the plot- people love imperfectly? Treasure your memories, even if they hurt? Clean your room? Regardless of its disjointed message , the movie has some very tender moments that will bring up some tears. While the animators seem to shy away from more difficult animation tricks, they make up for it with visuals and designs that are a treat. Most of the characters seemed static, however, they fit in with the scenery and react accordingly. The soundtrack is open and applicable to the film. Overall, the childlike quality that this film possesses benefits it throughout. It manages to be a great kids film while having some elements that are applicable to adults, making an absolute delight of a movie.