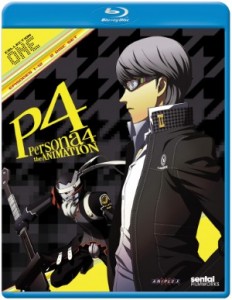 Persona 4 has been getting a lot of love lately. The PS2 game from 2008 has, in the last year, seen a PS Vita remake, a PS3/360 Fighting Game sequel, and on top of that, an anime. Picked up by Sentai Filmworks for release overseas, Persona 4: the Animation follows Yu Narukami (the nameless protagonist from Persona 4) and his friends as he spends a year in the rural village of Inaba. However, when a series of murder mysteries begins, his dreams of a quiet life quickly change as he ventures to a new world to solve the mysteries and save the lives of the victims.

The story will be instantly familiar to anyone who has played the games. There are a lot of in-jokes and fan service moments involved (“I should just leave him be…”), but there is enough deviation from the game to make it worth watching for those who already know every twist and turn of the story by heart. For those new to the story, it is very easy to follow with the new format.

For those unfamiliar, P4: Animation does not constrain to one specific genre. It fits into Urban Fantasy, Murder Mystery, Comedy, Drama, Slice of Life, Romance, Action, Adventure, and more. This means that the series has something for absolutely everyone, but also means that if, for instance, you can’t stand Romance in your anime, then there will definitely be parts that you won’t enjoy. However, nothing is on screen too much at once, which is good whether or not you like only parts, or like everything.

The main difference between the Blu-ray and DVD release of this anime is the fact that, due to fears of reverse-importation, the Blu-ray has had the Japanese language option completely removed. Because the DVD version still has it intact, both are exactly the same price. However, if you fear that the English dub feels unnatural, fear not. Sentai Filmworks managed to get the exact same voice cast that Persona 4: Arena got, which means that the voices are identical to the PS2 game’s with two notable omissions (Chie and Teddie); however, the new voices fit in well and manage to represent the characters perfectly. Another thing is, with some of the new writing in the English dub, the conversations flow much better and make more sense, which was my main problem with the original Japanese.

The first collection (of two) contains the first 12 episodes, that is up to the Mitsuo plot arc, which can be slightly problematic. Without spoiling too much about the way that Episode 12 ends, it doesn’t particularly leave a cliff-hanger, and unless you stick around for the “next-time” scene at the very end, it could be mistaken for the final episode. Nowhere does it mention that there will be 13 more episodes, unless you read the text on the front cover that mentions “Collection One”, which a casual watcher might not. Especially with no release date or window for Collection Two, it’s kind of abrupt to just end and put the discs back on the shelf when you know what comes next in the story.

The animation itself is absolutely gorgeous. It is more like the character portraits from the original game, and less like the in-game cutscenes which seemed slightly awkward and rushed. Characters move fluidly, and the work on facial expressions convey a lot of story and emotion. Lip-syncing is almost perfect too, which is a very impressive feat given how natural a lot of the dialogue feels. The soundtrack is also done by Shoji Meguro, the composer from the vast majority of ATLUS games (including the original Persona 4).

There’s really not that much more to say about Persona 4: The Animation. The game is extremely loved (and is one of my top 5 games of all time), and the anime really does it justice. If you are like me, and watched the Japanese version of the anime, you’ll be happy to know that the English dub fixes significant amounts of plot-holes and problems. The question you should be asking yourself at this point is not “should I get it?”, as I’m almost certain that everyone will find something in it to love. The question is, “since both the DVD and Blu-ray are the same price, which one do I get?”. While I only screened the Blu-ray version, I can tell you that it is up to personal preference: if you prefer having it in HD, or prefer having a Japanese language dub available. Personally, I would go for the Blu-ray version as the Japanese language dub can be viewed on Hulu, but that is just my opinion.

Disclosure: This series was screened using a review copy sent from Sentai Filmworks.