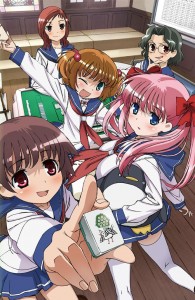 Saki is an anime series that centers around high school girls playing mahjong. The original manga by Ritz Kobayashi started running in Square Enix’s seinen magazine Young Gangan in 2006 and is still being published. The first season of the Saki anime ran in Japan from April to September of 2009 and is available with English subtitles on Crunchyroll.

Saki centers around none other than show namesake Saki Miyanaga, a freshman at Kiyosumi High School. Early in the school year, her middle school friend Kyoutarou Suga drags her to the mahjong club. Saki grew up playing mahjong with her family, but began hating it because, no matter what happened, someone in her family would get upset when they played. Kyoutarou and the other club members, including reigning middle school champion Nodoka Haramura, convince her to join the club, but whenever she plays, she always ends up with a score of 0, almost impossible to do, even when you try. Eventually, team captain Hisa Takei realises this pattern, and knows that she may have a player with more skill than even Nodoka on her hands. Eventually, the team convinces her to play to win and sets its sights on making the national tournament, where Saki might cross paths with her sister Teru, a mahjong champion in her own right. Season one of the series covers the start of school and training camp up until just after the prefectural qualification tournament. With so many loose ends, a season two should be in the works eventually. Since the manga is still ongoing, there will be plenty of material for adaptation.

The story is pretty standard fare for a sports-type anime. The protagonist underestimates herself and doesn’t realize the skill she truly has, but through the help of her circle of friends, she grows to become a powerful force in her field. Even though, the wins and losses that Saki faces are predictable because of the genre, it still makes for an enjoyable series. The vast array of characters that she comes in contact with definitely help with that; though, at times it does seem like a catalog of fanservice, including a requisite bath scene they shoehorned in near the end of the series. Since the series focuses on a girls-only mahjong tournament, there are more female characters to shake a stick at. To name a few, there’s the princess-like Touka Ryuumonbuchi, the mischievous Kana Ikeda (who even sprouts cat ears at times), and the Yuuki Kataoka, childlike in both appearance and maturity, who also has an obsession with tacos. Being a series with few male characters, the vast majority of the  romantic energy is played out via lesbian undertones, though some are less subtle than others. Some of the characters also exhibit supernatural abilities at the mahjong table. Saki herself has a penchant for winning by a rather uncommon method while other characters can do things like make their discards go unnoticed or stack fate in their favor even though they use automatic tables. The addition of these super-players adds a layer of fantasy and humor to an otherwise simple slice of life story.

Saki centers around a style of mahjong called reach mahjong, but doesn’t necessarily go out of its way to teach the uninitiated the basics before diving into various advanced terms and ideas. Having played mahjong a couple times (though not reach style), I had some idea of the basic concepts of the suits, dragons, and winds as well as pons, kans, and chis. However, watching the players rattle off various scores and hand names can get confusing. The story did manage to reignite my interest in the game, and I’ve read up and playing more mahjong since starting the series than I ever did before; so, it’s not necessarily a complete turnoff if you haven’t played mahjong.

The art quality for most of the series is decent but not outstanding; however, in the last few episodes, it did seem to have more flaws. Perhaps the art budget began running out, and some corners had to be cut, but it does not ruin the series at all. The female characters are all drawn with enough differences to tell them apart and clearly indicate which interests they were trying to pique. A lot of time is spent looking at mahjong tiles, too, and plenty of effort was put into drawing all the details on them, as well.

For the most part, the music of Saki is pretty upbeat, but the few times that Saki has to face her demons, the show comes prepared with the proper ambiance. When the show ends on those more somber notes, they play “Zankoku na Negai no Naka de” sung by Kana Ueda (Saki) and Ami Koshimizu (Nodoka), which isn’t as peppy as the other openings or endings. None of the opening or ending themes are bad, but I think my favorite is the first opening “Glossy:MMM” by Miyuki Hashimoto.

All in all, Saki is an above average, but not outstanding series. I’m definitely interested in seeing a second season made and playing more mahjong thanks to the show.