Three years after their first venture into the North American anime business, NIS America has released their first feature-length movie. The home of the Prinnies has done a great job with some of their series selections, but does their touch carry through to films?

In the world of The Princess and the Pilot, war has raged on between the Levamme Empire and Amatsukami Imperium for some time, with both sides taking heavy losses. Even so, Prince Carlo of Levamme still found time to find a fiancée. He proposed to the elegant Juana del Moral and promised her that he would end the war within the year so the pair could be married in peace. However, before the war can be brought to a close, Amatsukami attacks the del Moral estate, killing Juana’s father. After his death, it is decided that Juana needs to be sent to the Prince’s side, and the job falls to Airman First Class Charles Karino.

While Juana grew up in the auspices of nobility, Charles grew up poor and shunned by many for having one parent from each warring nation, but he somehow learned to fly while working as a custodian at the airbase. Through the flashbacks to their childhoods and Charles’ interaction with the other soldiers, it becomes quite clear that the sting of racism and classism is alive and well in Levamme. Unfortunately, while the movie does touch on these topics in order to flesh out the characters, it could have delved even deeper in these areas to provide more depth to the world. 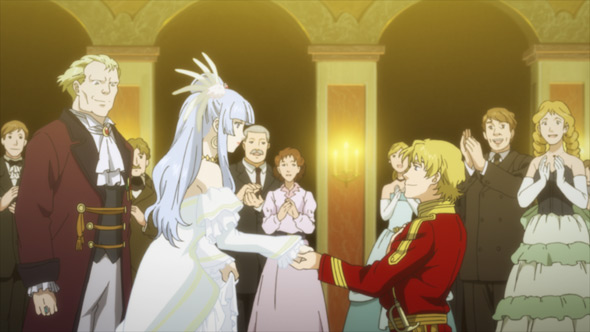 The movie eschews this exploration for the most part, instead concentrating on the characters’ feelings for each other, which develop throughout the tumult. Even with danger surrounding them, the characters manage to find safe havens where they discover how much they actually have in common. Unfortunately, some of these scenes really slow the movie down. Nonetheless, even with these issues, the movie does pull things together quite well for an evocative, not-so-Hollywood-style ending.

It’s quite clear that Charles is the moralist of the story, even when he tries to hide it by telling Juana he’s just in it for the money. Eventually, he comes clean about his real feelings about the job he has been handed and the war in general; however, he refuses to let his feelings stop him from completing his assignment. In the end, Charles manages to play the steadfast soldier, and in many ways, this is perfect for who he is.

Conversely, Juana shows some growth over the course of the movie. When she first boards the plane, she performs the part of the aloof noble quite well. Her handmaids dump excessive amounts of luggage into the cargo compartment of Charles’ plane, and she doesn’t bat an eye at how the extra load could affect their flight. However, once she loses the physical trappings of her status, she also starts to lose some of the emotional ones as well. As they move closers and closer to their destination, Juana is left questioning whether she should abandon everything and run away with Charles. 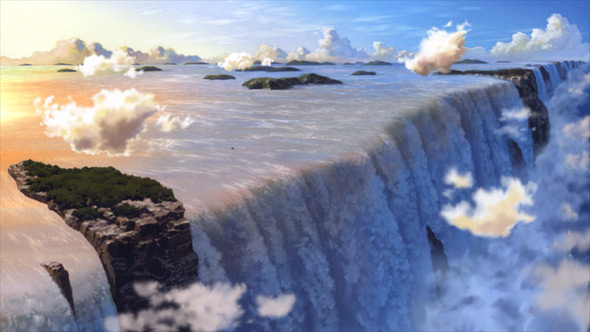 While the story is lacking at times, the visuals are quite well done. Befitting of a movie that spends so much time in the air and on the water, the animators at Madhouse clearly spent a lot of time perfecting the look of the ocean, the skies and the clouds. The clouds especially carry a great amount of detail and float along in echelon, giving a lot of visual depth to the skies. The characters and other environments are also well designed, but they tend to carry more muted color palettes versus the skyscapes. The intermittent airfights are also nice to watch with their  juxtaposition of technology and nature, though Charles definitely avoids them as much as he can, much to the chagrin of those looking for a lot of action.

The music and voice acting are also well done, but not to the level of the art and animation. The voice actors of this Japanese-audio only release are quite well done, both in their spoken lines and also the singing on the insert songs. The sounds of the planes and gunfire were also balanced well.

Overall, while The Princess and the Pilot does hit some turbulence in the storytelling, Charles and Juana do manage to weave an interesting and realistic tale within their fanciful setting. The visuals and characters make this an enjoyable story to experience, even if it feels almost too familiar at times.