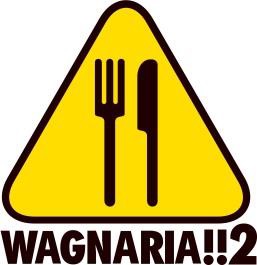 The staff at Wagnaria family restaurant return for a second season of workplace comedy in Wagnaria!! 2. If you haven’t seen season one, think of it as Waiting… except the staff isn’t quite so spiteful–towards the customers or fellow staff members. You could pick up season two and not have a problem storywise, but this one does pick up where season one left off, so you’ll be missing quite a bit of character background.

The whole cast returns from season one, and the show pretty much picks up where things left off. There is substantially more character growth to be had over the course of this season as compared to season one, though, with Inami and Takanashi taking center stage. Ever so slowly, Inami is coming to grips with her androphobia, though she still lets loose with a barrage of fists whenever Takanashi (or any other guy) comes too close. Of course, this means that she still has trouble serving half of the customers that come in, but the rest of the floor staff do their best to help cover when she needs it. Takanashi is still just as creepily obsessed with tiny, cute things, including Popura, his diminuitive coworker with a neurosis about her height. However, he does manage to start seeing her more as a person and less the walking embodiment of kawaii. The rest of the crew also get their share of screentime: Yachiyo and her sword, the eminently lazy manager Kyoko, the cooks Jun and Souma, and of course Yamada, the unfortunate kid who just wants attention. Even the absentee owner Otoo pops in again, much to the delight of both the attention-starved Yamada and the eternally hungry Kyoko.

Thanks to Takanashi being responsible for overseeing Inami and helping her with her issue, the pair start to entertain some possibly romantic feelings for each other, which is the closest thing this show has to a continuing plot line. Of course, they don’t hold the spotlight the entire time, as other characters appear here and there throughout the season to flesh out more backstory for the rest of the cast, too. A couple of Kyoko’s goons come to help out when Wagnaria needs a few extra hands, and the event also gives a little more insight into Kyoko’s days as bancho (gang leader) and why Yachiyo is so enamored with her. Another “Yamada” also makes an appearance this season, and he claims to be searching for his lost sister. Unfortunately, this whole sequence is played for laughs and left without resolution.

As a slice-of-life series, Wagnaria!! 2 is very episodic; if you’re looking for major story arcs and surprising plot twists, you’ll have to look elsewhere. That’s not to say that the story doesn’t have any worth, though, as the aforementioned character development shows. The series lives and dies on the jokes and character interactions in each episode, telling the tale of a group of very quirky restaurant workers learning to tolerate, and in some cases maybe even enjoy, either others’ neuroses. For the most part, the jokes might elicit a chuckle or two, but none of them are laugh-out-loud funny, and much like Seinfeld, it really amounts to “a show about nothing.”

As with all NIS America premium editions, Wagnaria!! 2 comes in a decorative slipcase with an included hardcover picture book. The book contains stills from the show, character biographies and episode summaries. Unfortunately, the on-disc extras are a little sparse, with only clean opening and closing songs and a handful of trailers available. The audio track is Japanese only with English subtitles, and while the localizers have a little fun here and there, the subtitles are true to the original. This season’s themes, “Coolish Walk” and “Itsumo no You ni Love & Peace” are both catchy, but not quite to the level of season one’s “Someone Else.” The background music is typically chipper and stays out of the way, which is just fine since the show is so dialogue-heavy. 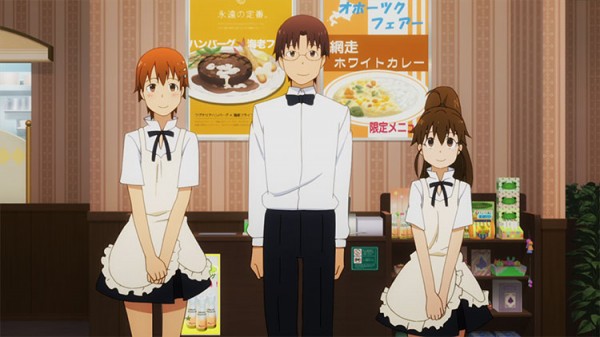 The visuals, on the other hand, are definitely an improvement. A-1 Pictures is still in charge of the animation, but season two has a new director at the helm, and it seems to have paid dividends. The character designs themselves are virtually the same, but the animation seems to have improved over season one. The lines are a little cleaner, and the movements a little smoother, though there are still the occasional hiccups if you look closely. The backgrounds are detailed enough to give off a living restaurant environment, but they aren’t hyper-realistic and mesh with the detail level of the characters.

Overall, the graphical improvement of Blu-ray and the semblance of advancement in Inami and Takanashi’s relationship make this season a little better than the first. Fans of season one will enjoy this one just as much as the original, though the way it’s put together, the show can be tough to burn through in one sitting; however, taking in a couple episodes at a time makes for a fun, and sometimes funny, show. The character quirks can be a bit extreme at times, but they’re just exaggerated versions of how people act in real life… except maybe walking around with a sword at the ready. That one might not fly in just about any workplace.