The girls of Nanamori Middle School are back for another season of being lazy and acting silly. Yuruyuri season one was cute, but it was missing that certain something that could make it great. Does season two find that spark? Read on to find out!

If you haven’t watched season one (though you probably should, even with the lack of a coherent narrative), the series follows the girls of the Nanamori Middle School Amusement Club, a group of students who often sit around having tea and snacks after school instead of playing sports, going to the library, or doing volunteer work like their classmates. They commandeered the room previously used by the now-defunct Tea Ceremony Club, a fact that puts them at odds with the Student Council in season one. By the end of that season, that issue is mostly resolved, leaving the four club members to goof off freely once more.

Like season one, this season lacks any real overarching plot to worry about, leaving the show to explore whatever it would like from episode to episode. Without any worry of losing the clubroom, Yuruyuri is left to be a joke-telling machine, and the characters pretty much keep to the status quo. Kyoko is lazy and playful as ever, though her precociousness seems to be toned down a bit this season. Likewise, Akari’s ability to disappear and be forgotten continues to be a running gag throughout the season. Chinatsu is still obsessed with her crush on Yui, while Yui in turn plays the straight man (or girl, in this case). While the four play well off each other and generate a few laughs, the show mixes in the Student Council in a little more often to break things up. The students also seem to spend more time outside of school, doing things around town, which keeps it from being a complete rehash of the first season, though they do still revisit some topics from season one, like visiting comiket with the requisite Mirakurun cosplay.

With more time spent on the Student Council, those characters get a little more depth in season two, though no one’s character is every fully fleshed out, the main quartet included. Yuruyuri season two also introduces several new characters, including the sisters of the previous cast members. Many of the sisters have similar predilections to the main and supporting cast, including one particular creeper who loves her own sister very much. Between the all-female cast and the prevalence of yuri-vision, it makes you wonder if there’s something in this town’s water supply. 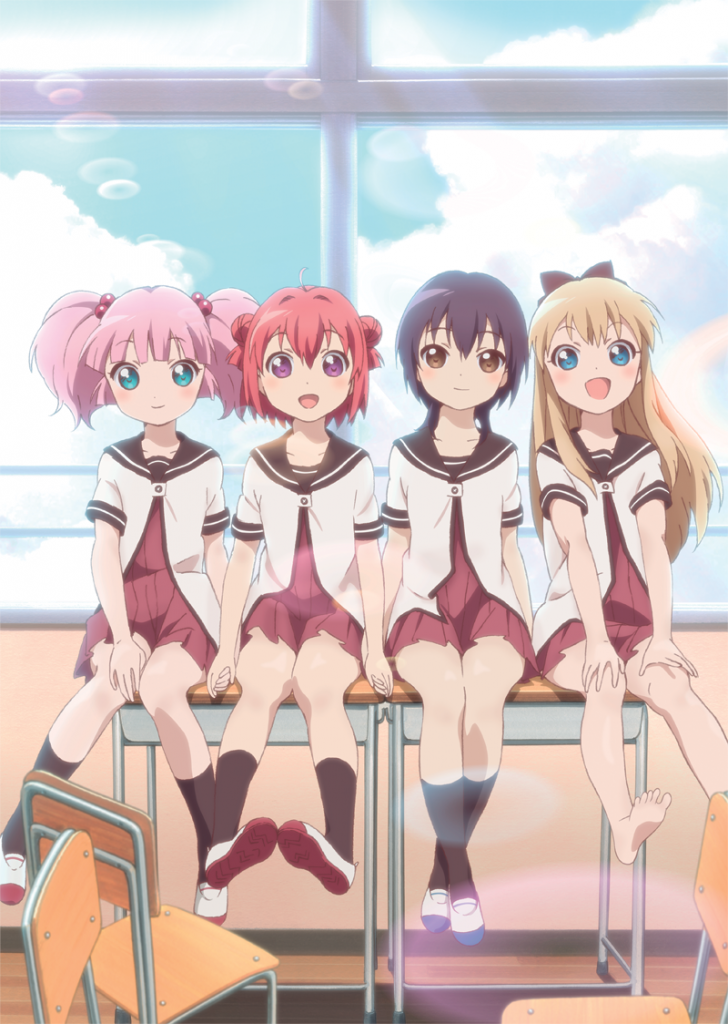 Much of the show’s audio track is lighthearted and fun, as it should be. The voice track is Japanese only, and like season one, the actresses keep the characters cute without getting annoying. Season two features new opening and ending themes; both “Yes! YuYuYu☆YuruYuri♪♪” and closing “100% Middle Schooler” are performed by the show’s voice actresses, and they are good, but not as catchy as those from season one. There is also a special intro featuring Mirakurun in episode six to change things up and a special ending theme for episode eight. This alternate ending song is accompanied by some disturbing drawings from the mind (and hands) of Chinatsu, though she really thinks they are cute and wonderful. You have been warned.

Graphically, the show is pretty average for the most part. There are a few minor blemishes here and there, but nothing that will bother most viewers. The character designs didn’t really change between seasons, and the new characters that are introduced fit right into the schema that the show has established. The only real graphical deviations come in the form of Chinatsu’s aforementioned drawings, which will haunt your dreams.

Yuruyuri season two’s premium edition comes with the NIS America standard slipcase featuring some nice art of the characters as well as a small artbook. Inside, there are collections of character designs, sketches and finished art pieces as well as an episode guide for season two. Along with the standard extras, Yuruyuri season two also includes a “Video Artbook” on the second disc. This artbook shows off some character designs as well as animatics (sketches used to help with planning out a scene), putting several of them together in sequence and then showing the final animated scene they were used in. It’s a nice addition, as it goes through several phases to show the level of planning that goes into each scene’s animation. These snippets span both seasons of the show, and there are seperate collections for each of the main characters as well as some of the student council’s staff. It’s an interesting extra, and one that I would like to see more shows include in the future.

Overall, Yuruyuri season two is a lot like season one — a sometimes-goofy, lighthearted show featuring a group of middle school girls just out to have fun. If you don’t go into it expecting a deep, immersive story, there’s still fun to be had with the show. Fans of the genre will get their kicks, but the fact that the show draws on the same pool of jokes repeatedly might keep some from getting to the final episode, which is totally worth sticking it out for.