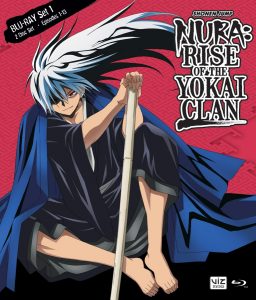 Viz media has announced a new anime release adapted from one of their Shonen Jump titles. Based on Hiroshi Shiibashi’s manga series of the same name, Nura: Rise of the Yokai Clan follows Rikuo Nura, a not-so-average middle school boy.

Nura lives the life of a normal boy by day, but at night, he takes on the form of a demon called a yokai. His grandfather, Nurarihyon, is the Supreme Commander of his clan and wants Nura to train to be his rightful heir. Nura is torn between his desire for a normal life, and defending his clan when an inter-clan war begins, forcing him to decide which world to turn his back on.

Both versions of the collection contain the first 13 episodes with English sub and dub options. The DVD version also contains production art on disc, and the Blu-ray edition has an expanded art gallery as well as a clean version of the opening. Viz Media will release both the DVD and Blu-Ray collections on April 2nd. The DVD set is priced at $45 and the Blu-ray version will cost you $55.