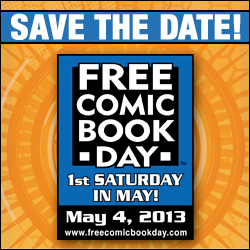 The 11th annual Free Comic Book Day is almost upon us. For those unfamiliar, the first Saturday in May has been celebrated as Free Comic Book Day since 2002. It’s a day on which fans of comics, manga and graphic novels can visit their local comic book shop and pick up a free comic, usually containing samples from three or four series.

It’s a great opportunity to head over to the local comic shop, grab some free reading material, and maybe meet some fellow comic fans in the process. If you’re curious about participating shops in your area, you can check out the shop locator at the Free Comic Book Day site. While the festivities are mostly concentrated in North America, there are still a number of shops around the world also participating.

Among the publishers participating this year are Dark Horse and Viz. As this Saturday is also May 4th, one of their offerings is a 30-page, three part issue featuring Star Wars along with Avatar: The Last Airbender and Captain Midnight. If that’s not your thing, Dark Horse is also offering a second comic featuring Mass Effect, Killjoys, and R.I.P.D. And without spoiling anything, both of them look pretty cool, but I’ll probably be grabbing the Star Wars one, myself.

Viz will be offering up two comics, as well. Their Viz Kids comic will feature Goin’ Places and Uglydoll while their teen-oriented release has shonen favorites Dragonball Z and Rurouni Kenshin: Restoration. Viz will also be releasing an all-ages sample containing Hello Kitty, Mameshiba, and Pokemon Pocket Comics. Viz also released a short video about influential comics with some of the staff who help make the Uglydoll and Hello Kitty series.

In celebration of Free Comic Book Day, Viz also put together a short video featuring some of the staff and artists involved in the Hello Kitty and Uglydoll series:

Even if none of these grab you, there will be plenty of other offerings out there this Saturday. So get out there and grab a free comic. And May the Fourth be with you!