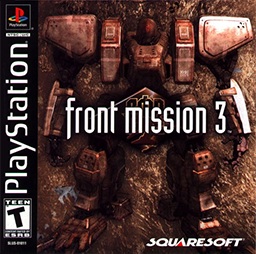 While browsing some ESRB reports, SiliconEra noticed an ESRB rating for a certain tactical game filled with mecha battles. No, not Vanguard Bandits, but almost as good. Front Mission 3, originally published by Squaresoft, has Sony Computer Entertainment America listed as the publisher, as do virtually all PlayStation Network downloadables.

For those unfamiliar with Front Mission titles, the main series games are RPGs that feature a grid-based tactical battle system. You control a squad of giant robots outfitted with guns, melee weapon, rockets, etc. and can do damage to specific parts of the enemies’ robots, disabling arms and legs in the process. Front Mission 3 featured two playable storylines that crossover at various points.

Unfortunately, the ESRB report does not indicate a release date, but hopefully the answer is “soon.” The game is already available on the Japanese and European PlayStation Networks, but hasn’t seen a North American release since the PS1 game came out in 2000.