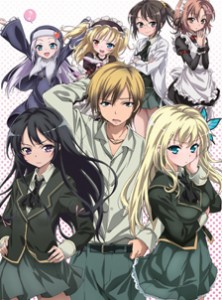 On January 28th, FUNimation announced that they acquired the rights to the anime Haganai (Boku wa Tomodachi Ga Sukunai). All twelve subbed episodes can be viewed on the FUNimation website already, but the company will also release the series on both DVD and Blu-Ray.

The full name for the series roughly translates to “I don’t have many friends,” and it appropriately follows a group of students who don’t seem to fit in with their peers. In Haganai, blond-haired, fierce-eyed Kodaka Hasegawa transfers to a new school where his looks make people think he is a delinquent. He has trouble making new friends until he meets Yozora, a loner whose only friend is imaginary. The two decide to create a club to learn how to make friends. As other lonely students become members of the club, the classmates bond through group activities like cooking and games. Can these misfits stay together and get along as friends?

Haganai is based on a series of light novels by Yomi Hirasaka. The same light novel series has also inspired two manga adaptations. According to Anime News Network, the anime finished airing in Japan in December 2011.

Check out FUNimation’s official website for Haganai to stream the episodes for free.