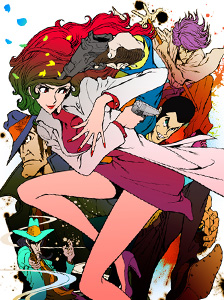 FUNimation recently loaded up on license announcements at Otakon for series both new and old.

First up, FUNimation announced a broadcast, streaming, on-demand, and home entertainment license for the entire Tenchi Muyo! series incluidng 2010’s Tenchi Muyo! War on Geminar OAV series. The War on Geminar spin-off takes place 15 years after Tenchi Muyo! GXP and follows Tenchi’s half-brother Kenshi. Kenshi gets captured during a mission, but fortunately, Princess Lashara lets him live for now. He must escape back to Earth as Geminar breaks out into civil war; meanwhile, he’s doggedly pursued by both goverment officials and the women of Geminar, for very different reasons, of course.

FUNimation also announced the streaming, home entertainment, broadcast and pay-per-view licensing rights to Maken-Ki! Battling Venus. The show is a romantic comedy that follows a typical high-schooler named Ohyama Takeru. He just transferred to a new school where everyone has items called “Maken” that they use to fight in magical duels. Takeru struggles to find a Maken of his own on top of dealing with all the problems that come with being the new kid in school. The series is available now for streaming via the link above.

Next, FUNimation announced the rights to two shows just out in Japan this year. First up, they grabbed the streaming, home entertainment and digital rights to  Lupin III: The Woman Called Fujiko Mine. The series goes back to the time when Arsène Lupin III, the world’s greatest thief, and Fujiko Mine met for the first time. It is the first new Lupin III TV series in over 25 years. In addition, they also acquired the streaming, broadcast, home entertainment, and theatrical rights to the zombie comedy Sankarea. Furuya has always been obsessed with the undead. When he tries to resurrect his dead cat, he accidentally ends up turning a girl into a zombie of his very own instead. You can watch all the episodes of both series at FUNimation’s site now.

Finally, FUNimation acquired DVD and Blu-ray rights to a slew of other series including Space Battleship Yamato Resurrection, Fairy Tail season 2, Aquarion Evol, and One Piece seasons 5 and 6 as well as the movies Akira, Fairy Tail, One Piece: Strong World, and the yet unreleased One Piece Film Z.

One Piece season five DVDs will hit stores next summer while season six will not make it to North America until Summer 2014. Unfortunately, their announcements did not come with any other release dates, so make sure to check back with us for more information as we get it.