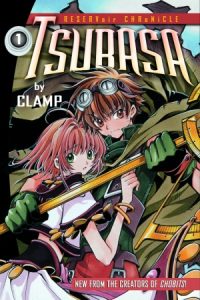 FUNimation has officially announced licenses for two Tsubasa OVAs: Tokyo Revelations and Shunraiki. The two OVAs were released in Japan in a package with the later volumes of the manga series Tsubasa: RESERVoir CHRoNiCLE. The cross-over manga epic, written and illustrated by CLAMP, began in 2003 and ended last year with volume number 28. Volumes 21 through 23 each had a disc containing episodes of Tokyo Revelations while 26 and 27 contained episodes of Shunraiki.

According to Anime News Network, Vic Mignogna and Chris Sabat first made mention of the titles at Anime Milwaukee; so, presumably they will be continuing to do voice work in the OVAs. Neither title has been given a firm release date yet. Del Rey is releasing the final two volumes of the manga series this year.