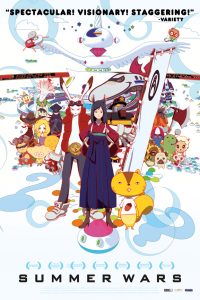 The FUNimation blog staff were still hard at work late on Friday night, posting details about the upcoming theatrical release of Summer Wars. The current plan for the run spans December through February in an 11 city tour. While it has not been confirmed by Funimation yet, speculation is that the dubbed version of the movie will be shown. We’ve been informed that not all of the showings will be dubbed. In some cases, the matinee showings will be dubbed, the evening showings will be subtitled, giving fans their choice of format. Each theatre will have their own system; so you’ll have to find out locally.

The current dates and locations:

According to the posting, more showings will be added if there is enough interest. To add showings, the theatres must contact GKids directly and arrange the dates themselves. GKids also organizes the New York International Children’s Film Festival.

Summer Wars is directed by Mamoru Hosoda (The Girl Who Leapt Through Time) and written by Hosoda and Satoko Okudera. The story centers around a shy high-school math genius who has been accused of being a hacker. He must prevent the real world from becoming to intermingled with the virtual world of Oz when an artificially intelligent system creeps its way into satellites, power plants and more.

Anyone out there planning on going to any of these shows? Sadly, being in Florida, there isn’t one remotely close enough for me to see it.