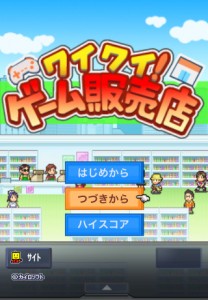 Kairosoft, best known in the U.S. for their iPhone title Game Dev Story has announced a new phone game… in Japan. The new title, Waiwai! The Game Dealer, takes you out of the game-making business and into the game-selling one.

According to Destructoid, The Game Dealer is now on sale in Japan via iTunes, and hopefully we’ll also see an English version in the near future. For the uninitiated, we reviewed one of Kairosoft’s other titles Game Dev Story, and found it surprisingly addictive for an otherwise simple game. If the new game is anything like that, you’ll be spending hours playing. No word yet if you can bug your customers about pre-orders and membership cards, though.