Welcome to this week’s gaming news recaps! It’s been a pretty quiet week for games after the buzz of E3 but there are still a few cool new releases and things you wont want to miss!

Murder Files: The Enigma Express Releasing Next Week
Relentless Software have announced the latest game in the Murder Files franchise, entitled Murder Files: The Enigma Express. The hidden object mystery game is set to be released on June 26th worldwide for the iOS devices. Beginning in a train station in London, the game asks players to solve a particularly curious case involving eight seemingly useless objects which have been stolen from a secret vault belonging to incarcerated criminal mastermind Five Fingers. It is the player’s job as the detective to find out what they are for, who has taken them, and why they are worth killing for. Martijn van der Meulen, product lead at Relentless commented on their vision for the game: “Our studio has a proven track record of creating great games that everyone can play. With Enigma Express we are continuing this tradition. We’ve been able to bring a 1930’s world filled with mystery to life, thanks to some exceptionally talented people who have done their best to create an adventure unlike any other. This is a very exciting moment for all of us and we cant wait to see how people will work together to get to the bottom of this enigma”. For more information on Murder Files, visit the game’s site. 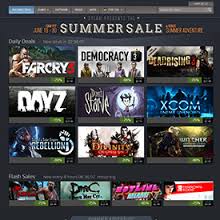 The Steam Summer Sale is Here
The Steam summer sale has launched, with such deals as 80% off The Witcher 2 and 75% off Far Cry 3 and XCOM:Enemy Unknown. Other games included in the sale thus far are Fallout 1, 2 and Tactics, which have been re-released on Steam after being removed from Good Old Games. They currently go for £3.99 each or £9.09 in a three game collection, as their usual price is £7.99 each and £13.99 in the collection. Dead Rising 3, Divinity:Original Sin and Sins Of A Solar Empire:Rebellion also have their prices shaved from 25% to 80% off.

The steam summer sale lasts until June 30th and will have new deals every day and new flash sales every eight hours. There are also sales that rely on community votes to determine what games get discounted next, which run every eight hours like the flash sales. In addition, Steam is giving away games to lucky customers every day during the sale. For more info on the giveaway, check out the Summer Sale FAQ.

Playstation 4 Soon to Launch Pre-loaded Games
The Playstation 4 will soon be supporting pre-loading via the Playstation store, starting with the new Transformers: Rise Of The Dark Spark, which comes out on June 24th. Sony have said that you’ll be able to download game files a few days in advance of its release date–even from standby mode–and upon release the game will then be unlocked on your console. This is a handy feature for gamers who prefer not to buy actual game discs at retail and also acts as an incentive for pre-orders made through Playstation Network. Be aware though, the pre-order page on the Playstation Store comes with a clear warning in all-caps: “CANCELLATIONS AND REFUNDS ARE NOT AVAILABLE EXCEPT WHERE REQUIRED BY LAW.” Moving forward, there will be pre-orders available on the Playstation Store for most major games including new PS3 and PS4 exclusives like Bloodborne and Uncharted 4: A Thief’s End. Both games came fresh off of E3 reveals and still do not have release dates as yet. The Xbox marketplace will also be launching a simliar digital games download format in the form of their marketplace, where you can download full games.

Trailer for DC Universe Heroine Supergirl out Now
A trailer for Supergirl, the latest champion from Infinite Crisis is now available. The free-to-play MOBA from Turbine, based in the DC universe, is set to be released on July 2nd and challenges players to make the world a better place one punch at a time.

Just like her cousin Superman, Kara Zor-El survived the destruction of Krypton by escaping in a spacecraft of her father’s design. After crash landing on Earth, Kara not only realised that her powers were manifesting, but that she and her cousin were the only survivors of Krypton. Whilst dealing with her grief and discovering her resilience, she tries to discover a love of her new home world, Earth. You can watch the trailer below, and players can sign up for the beta today and immediately enter the Infinite Crisis battle arena.