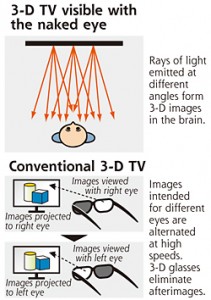 The Yomiuri Shimbun (via Industry Gamers) is reporting that Toshiba plans to release a 3D television that does not require glasses to use. Three models should be available in time for Christmas. So how does it work? The screen can emit light at different angles so each eye sees a different enough image for your brain to create the 3D effect. Pretty much the same way the 3DS works but Toshiba’s screen can work on several people at once. The TV is also “supposed” to not cause eye strain or headaches. If Toshiba can deliver then 3D may just take off in the consumer market. Toshiba’s official stance on the newspapers announcement was “We are not in a position to make any announcement.” Don’t you love when information hits the papers before marketing is ready?

Personally I just bought a new HDTV so I have no intention of upgrading for several years. But if this turns out as promised will you be buying a 3D TV?