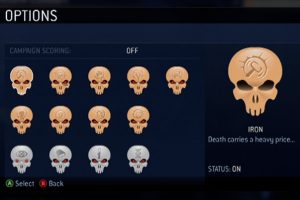 Well we’ve reached a new milestone in video games. The pre-order bonus now gives a major advantage in game. Those of us who have played the Halo games from the start are very familiar with Skulls.

These are game altering items that are found in-game. Most of them make the game harder. They take away your shields, your motion tracker. They even increase the intelligence of the AI so the enemies dodge, take cover, and will even throw your grenades back at you. The few that don’t make the game harder merely make it silly. One skull adds vulgar language to the marines dialogue, and another called Grunt Birthday Party is my favorite. With this skull all the grunts heads explode with confetti on a head shot. You also hear children’s voices saying “Hooray!” at the same time. The confetti does some damage but it is so negligible that it may as well do no damage.

That brings us to the Son of Grunt Birthday Party called Grunt Funeral.

An exclusive, game-modifying skull that changes the rules of the game for an explosively humorous experience, “Grunt Funeral” sends Halo’s most lowly and lovable enemy out in a blaze of glory. And plasma. And then more glory. Once the skull has been activated, every grunt’s methane tank will explode like a plasma grenade when killed. Watch out for the grunt chain reaction!

The Grunts are the most prolific enemy in the game. They are meat shields. As you can see in the video, they explode with the same damage and radius as a plasma grenade. This makes a huge difference in the way the game is played. A legendary difficulty play through becomes an easy victory with this around.

[Announcer Voice] Pre-Order now and receive a code for extra shields and bigger guns! Upgrade to the Collectors Edition for Infinite Ammo and never be killed due to reloading![/Announcer Voice]