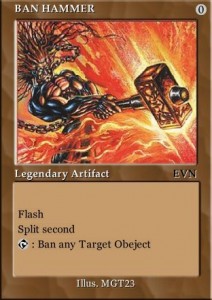 Halo: Reach has a credits system that allows one to unlock armor and voice effects. These are purely aesthetic in nature. No amount of unlocked armor gives you an advantage in game. So I am confused as to why Bungie decided to swing the ban hammer and reset the credit count of people who found a glitch that would allow them to earn credits faster. If you’ve played the game you would know why people would do this.

You get 25 credits for completing the main game. You need 1,000,000 credits to unlock things like a Flaming Skull Helmet. Even playing multiplayer matches only nets you a paltry sum of credits. Why wouldn’t I try to unlock these items faster. I paid for the damn game. While you may say “It’s about the challenge, the feeling of accomplishment when you finally unlock an item.” I say its about artificially increasing play time to hopefully keep players from trading their game in. Which is a stupid argument.

The players that trade games in often are not going to keep this just for a few cosmetic changes. Players like me that never trade games in, and have full time jobs don’t have the time to play hundreds of hours of multiplayer death match to unlock this stuff. So over all it just makes me angry that I paid for a game where I can’t enjoy all the aspects of it. If the credits to unlock things where 1/10th of what they are while keeping the rate of credit earning the same, I could let it pass but at these prices only the 12yr olds of the world will unlock this armor. And that demographic doesn’t buy new. Something to think about Bungie.