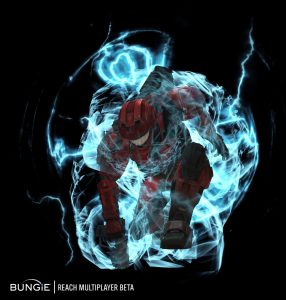 When the game starts you have a delay of about 5 seconds to choose your “load out”, similar to Call of Duty: Modern Warfare 2. The Spartans get a choice of 4 load-outs. All the load outs start with map default weapons. The differences are in the special “Armor Abilities” that you get.

The Sprint Load-out allows the spartan to do a full sprint. This gives you a great amount of speed for dodging incoming fire, especially from snipers, as you go from cover point to cover point. The down side is that you can not fire your weapon while running.

This is where those wonderful jet-packs we heard about come into play. The spartan gets a jet pack that allows you to move faster than your normal speed, but not as fast as the Runner Load-out, and gives you height advantage. You can fire your weapons while flying.

I particularly like this one. You get the same invisibility shield as the elites. You can fire your weapons while cloaked. The cloak lasts for 1 minute with a 1 minute recharge. It also comes with a radar jammer, which unfortunately affects your radar as well.

This load out gives you the ability to raise an impenetrable shield around the Spartan. Armor lock is unique to those playing as Spartans. A direct hit from a tank or wraith will not harm you and stuck grenades will unstick!! The downside is it has a limited charge and you can’t move while using it. This leaves you open to melee attacks as soon as you drop the shield.

The Elites get their own special load out called evade. This allows the player to roll in any direction to avoid danger, breaking enemy lock-ons and tracking in the process.

Overall each of the Armor Load-outs has it’s place and all are pretty well balanced in their effects. Which one you pick is really dependent on your own style of play, as well as your opponents. If you got a good sniper on the other team you might want to pick up a runner or the infiltrator gear. Infiltrators can be countered with using the Jetpacks to reach the High Ground, etc…

So far Bungie is limiting the types of games and maps that are available, although they keep rolling out new ones as they see how the servers are handling things. I was able to play some new variants of Capture the Flag. In a variant called

Head Hunter
Headhunter is a free-for-all gametype where players fight for flaming skulls and return the collected skulls to a designated (but mobile) deposit zone.

Players must eliminate their opponents and return the collected skulls to their designated deposit zone. When collecting the skulls, players are tagged with an navpoint indicator above their head which reveals the amount of skulls collected, even if they are in Active Camouflage. The more skulls the players collect, the easier they are to spot. If a player is killed, all of the skulls will be dropped and opposing players will be able to collect the skulls. Players are not penalized for carrying the skulls and are able to access all their weapons and abilities. The default game-winning score is 25.

Stockpile
In stockpile two teams fight for four neutral flags which appear randomly throughout the map and return them to their respective capture points, making it somewhat similar to Capture the Flag. Points are not awarded instantly when the flag carrier drops the flag on the capture points; there is a timed countdown of sixty seconds on each capture point and successfully holding the capture point as well as the flag after the countdown will award the winning team points. The flag only has to be within the capture point at the end of the timer. SO even if the other team has pick up the flag if they are still standing in the capture zone a point will be scored. The team that scores 10 flags first or the most flags in the 10 minute time limit wins.

Invasion
Invasion is team-based vehicle based firefight. The game begins on Phase 1, where only one portion of the map and no vehicles are available. As the game continues, more Phases unlock meaning there will be more objectives to be completed, vehicles will become available, and more Loadouts will become available as well. Boneyard’s version of Invasion features the Elites on the offensive, trying to obtain a UNSC data core with valuable information on it, while the Spartans are tasked with defending it.

Invasion Slayer is a six-versus-six Spartan-vs-Elites slayer variant where players will eliminate the opposing team in order to score points; obtaining a total of 100 kills will end the game. The slayer variant also features Phases which can be unlocked by either acquiring a specific amount of kills or surpassing a specific time.

The defending team consists of three Spartans on top of a well-defended hill, while the attacking team consists of three Elites that start at the bottom of a hill and as such have to fight their way up to the generators. There are a total of three defense generators on the map which the Spartans have to defend. At the beginning of each match, several weapon caches will be distributed by a Longsword in different locations on the map; each weapon cache can potentially be a Spartan Laser, a Sniper Rifle or a Rocket Launcher. Each weapon cache will be dropped evenly around the map to allow both teams an equal chance of acquiring them. The defending Spartans have the ability to temporarily make the generators invulnerable. This invulnerability lasts 30 seconds with a cool down time after wards.

While those changes have made an impression on me I found that the new weapon types did not. NO matter how many names they give them, you’re still choosing a pistol, a semi-automatic rifle, full-automatic, or a sniper style weapon. Covenant or Spartan design did not seem to make a difference.

And due to the addition of the load out abilities, dual wielding is gone. The button placement for the second weapon now activates the armor ability. The melee button has moved from (b) to (RB). I found this made melee a lot easier. The only other major change is they have reverted back to the health system of the original HALO:CE. You have your shields and a health bar, which means there are now health packs hidden in each level. It’s been so long since I had to worry about health packs I always forget to look for them now.

Overall I like the changes that have been made. I particularly enjoy the team based games like stockpile over the slayer types. The base game play remains the same level of fun as before and the new load outs and game variants add a nice element of strategy that can allow you to play to your particular strengths. But I’m one of those guys that actually likes to play the story mode too, so I can’t wait for the full game to be released. Halo: Reach is scheduled for release this fall.