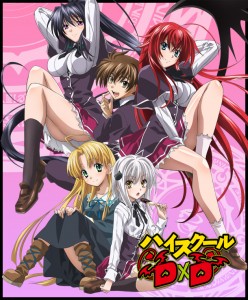 FUNimation has announced a license for the broadcast and distribution rights of High School DxD. The series, based on Ichiei Ishibumi’s light novels, follows Issei Hyodo, a high school boy with dreams of running a harem, but hasn’t even been on a date. Just when things are looking up for him and he lands his first date, he gets killed by a fallen angel and reincarnated as a devil servant to one of his upperclassmen.

FUNimation will be simulcasting episodes of High School DxD on their site on Mondays at 4 p.m. Central time starting January 23rd. While they have announced intentions to release Blu-ray and DVD versions of the series, they have not set a release date as of yet. We’ll keep you posted as we get more information or you can visit the show’s site here.