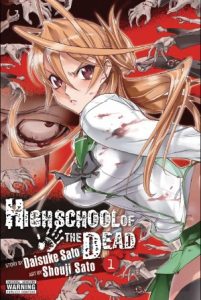 Daisuke and Shoji Satou’s High School of the Dead, known for showing off  mass zombie-slaying and oversized breasts, has now come to Hulu. Surprisingly though, it doesn’t require any age authentication. All twelve episodes are free to view with subtitles on Hulu’s website now courtesy of Sentai Filmworks. The show aired last year on The Anime Network as well as a simulcast alongside the Japanese release.

High School of the Dead centers around a group of high school students who are trying to keep from being killed by a plague of zombies that has erupted across Japan. The students’ school gets attacked by zombies one day, and, along with a few others from their school, they manage to escape into the city. However, the city itself is already in the throes of chaos from the zombie attack.