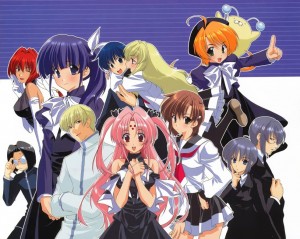 It’s a dream we have all had: To be surrounded by girls or guys, all of whom want your affection and will stop at nothing to obtain it. If only we could go back in time and see how certain rulers got along with having their own personal harems… Unfortunately, since we haven’t figured out time travel yet, unless you are super rich or preside over your own kingdom, chances are you will never get to personally enjoy this fantasy. And so we turn to anime to provide us with what life could be like if we were surrounded by beautiful girls or guys.

In simplest of terms, the harem genre is defined as a guy who is surrounded by three or more love interest characters who are generally women; when it’s the opposite, and its a girl surrounded by guys it is usually referred to as a “reverse harem.” Generally, the main protagonist of a harem anime is your average person, which makes him/her more relatable to the demographic. It is a rarity to see the main person as the best at anything physical or be the most good looking character and they’re generally not very smart, either; despite this, the character ends up with a magnetic personality that draws the other characters to them for one reason or another. Before the harem starts, the main protagonist is usually an outcast, loner, or has some sort of social stigma. The central character is then thrown into a harem situation by circumstances which can range from a childhood promise to a magical catalyst or even an alien invasion. Most of the time, the harem starts off with one or two girls/guys and then slowly grows as more characters are introduced and thrown into the mix.

The Childhood Friend: This character has known the lead protagonist since they were both young children. They usually develop romantic feelings for the main lead but hide their feelings at the risk of upsetting the balance of their friendship.

The Diva: Loud and brash, the diva usually takes the form of an overprivileged and excessively rich brat. They are not used to hearing the word “no” and will often use their money and influence to try and win over the main lead. Although the diva character doesn’t have to be rich, they still have an overblown sense of self-entitlement.

The Loli: This character is usually the youngest character, or has the look of a little girl. She wants to be seen as independent and will try to grow up too fast. In a reverse harem, a character with the look of a young boy is less frequent, but is referred to as “The Shota.”

The Shy One: As the name suggests, this person  is usually the shyest of the group. While they may have feelings towards the lead, they are the ones who have the hardest time expressing themselves. They feel most comfortable out of the way and in their own little worlds, where they usually have some sort of hobby that takes up most of her time.

The Narcissist: When the central character is suddenly and inexplicably popular, there always seems to be someone who can’t wrap their mind around it. They interject themselves into the middle of the group and try to steal the spotlight so everyone falls in love with them instead.

The Rival: This character is technically part of the harem but almost always never goes for the lead. The main reason is that they are attracted to members of their same gender, and they usually steer their affection towards one particular person. They will do anything to get that person to notice them, often resorting to the most outrageous schemes.

The Rather Short History of Harem

The harem genre is harder to trace then other genres because the elements we see evolved from other ideas present in romantic comedy anime, and because of this it doesn’t stand out as much as other genres.  Harem anime as we know it, though, began with Rumiko Takahashi’s Urusei Yatsura. 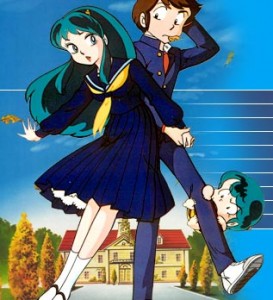 Urusei Yatsura  is known as being the spark that drives modern harem anime and embodies some of the tropes we see today. Earth is invaded by a alien race known as the Oni, and in the spirit of competition, they choose one human to defend Earth, by playing a game of glorified tag. The chosen human is Ataru Moroboshi, who must save planet Earth by touching the horns of Oni Princess Lum. Things get awkward for him because even though he has a girlfriend, Princess Lum starts to fall for Ataru as a result of a misunderstanding.

Though not a truly harem series, it was one of the first to feature multiple love interests for a protagonist. Originally, only Princess Lum and his girlfriend at the time, Shinobu Miyake, were his main love interests but this changed quickly due to a combination of his bad luck and being a huge pervert.The obligatory harem “beach episode” also began with Urusei Yatsura, as the result of the main characters receiving free tickets to the ocean via a supermarket lottery prize. If the harem does not have a beach episode, it is usually substituted by a water park or some place where there are is water and swimsuits, such as a bath house or spring resort.

Another Rumiko Takahashi classic, which helped set the foundation for harem, but like Urusei Yatsura, it is not a true member of the genre. Due to a curse, if Ranma Saotome comes into contact with any bit of cold water, he transforms into a girl. Thanks to Ranma’s gender swapping curse he/she did attract suitors from both sides; however, only about two or three characters were truly considered love interests.

Ranma gave us a fair few of the tropes we see in harems that tend to cause problems, such as the arranged marriage. Together, Ranma’s and Akane’s parents decided years before that two of their children would get married as to carry on their martial arts legacy. This provides the driving force for a good portion of the anime for they both have feelings for each other but due to them both being stubborn they are reluctant to say anything. As for his other love interests, they range from a gymnastics champion to a second fiancée as well as others from different countries, like China.

Generally accepted as the first cut-and-dry harem anime, Tenchi Muyo originally started out as a six episode OVA (original video animation) but was expanded and rebooted numerous times due to its popularity. While each version features different settings and adds or removes characters, the story remains mostly intact.

Tenchi lives a normal life with his father and grandfather out in the Japanese countryside until he accidentally gets involved with a group of alien girls who range from space pirate to alien royalty. They eventually move into his house and, due to the fact that they are all vying for Tenchi’s affection, the group tends to get themselves in trouble in one form or another. This holds pretty true whether the group finds themselves in rural Japan, big-city Tokyo, or even out in space.

Ouran High School Host Club is a good example of a reverse harem, which is when the main central character is a girl who is mostly surrounded by men. Haruhi Fujioka earns a scholarship which allows her to transfer to the prestigious Ouran High School. When she goes looking for a quiet place to study, Haruhi enters the Third Music Room, which houses the school Host Club, where male students “entertain clients.” Nervous and trying to find her way around, she accidentally knocks over an expensive vase valued at 8,000,000 Yen (around 80,000 dollars). To repay her debt she becomes the club’s errand “boy”–due to her short hair and androgynous face, everyone believes she is male. When it is discovered that she has a talent for bringing in clients, she is promoted to one of the hosts.

Ouran High School Host Club, is a series that manages to not only turn the gender roles on their head, but parody other aspects of the genre, as well. Each of the hosts represents a shojo manga stereotype from the cool and quiet guy, to the cute, little boy. Haruhi represents the natural character, who has an talent for making friends and becoming popular by just existing. Eventually, each character finds out she is a girl one-by-one, which leads to a few different comedic scenarios because each character must help in hiding her little secret.

Unlike other genres of anime, harem doesn’t have as long and colorful of a past due to the fact that a lot of the subjects and tropes we see are borrowed and shared from other genres. Despite this, it has not stopped the harem genre from expanding and appealing to more and more of a universal audience. The beauty of the harem is that it can be spliced into any genre as an interesting plot device. Whether your characters are other worldly beings who come to planet Earth via your bathtub or just a group classmates, it’s just another anime fantasy we all wish we could experience.

What are your favorite harem series? Do you prefer to have your harem made up of humans or supernatural beings? Let us know in the comments down below, or you may end up being in a harem, except you won’t be the central character.