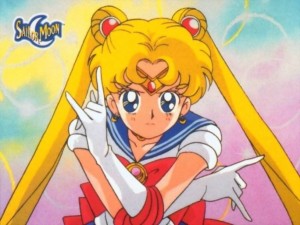 The magical girl, nowadays just saying that phrase conjures up pictures of talking animals, over the top cuteness, and flashy transformations, but it wasn’t always that way. It is a common belief, especially in North America, that the magical girl genre started with the ever-popular Sailor Moon series back in the nineties, when in fact it started long before that. Others might get it confused with the magical girlfriend genre, which feature a supernatural being (usually a girl) who by a twist of fate gets involved with and generally falls in love with an average guy. In this article, though, we’re talking the history of the magical heroine, and while many in this genre do have some level of romance in their plot, that isn’t the main focus the way it is in a show like Oh! My Goddess!

Before we set our sights on the Moon Kingdom, though, we have to go back a few decades to the beginning of the genre. It is a little surprising to note that the magical girl genre began with a little help from American television back in the days when we still used Technicolor. Much like how Disney has been the inspiration behind several facets of modern anime, the popular TV show Bewitched was the inspiration behind what is considered the very first Magical Girl anime, Sally the Witch, and the first Magical Girl manga, Himitsu no Akko-chan.

Mitsuteru Yokoyama, creator of Sally the Witch, directly adapted his story from Bewitched. It was his desire to take the idea of Bewitched and make it more child friendly. Sally the Witch is considered to be the first Magical Girl anime as well as the first shojo anime. This anime gave us some of the iconic magical girl traits, such as needing to hide her powers, having a magical servant and the need for a magical incantation. The thing that makes Sally the Witch different from the rest of the genre is that she was never given her powers but was born with them instead. 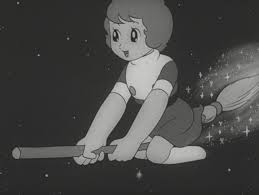 The truly first transforming magical girl, though, is Atsuko or Akko-chan from Himitsu no Akko-chan, whose manga actually predates Sally the Witch, but Himitsu didn’t get an anime adaptation till much later. This is the first instance of a magical object being used as the catalyst for a transformation. Akko-chan is given a magic mirror by The Queen of the Mirror Kingdom, allowing her to transform into anything she wants (in the same fashion of Sailor Moon’s Disguise Pen). 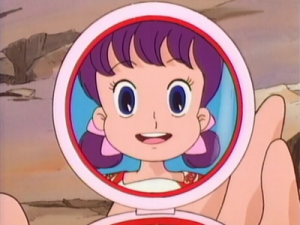 Fast forwarding a few years, we were given the next big magical girl which helped shape the genre into what we know it today.

Cutey Honey stars Honey Kisaragi, an android girl who must protect herself against the organization known as Panther Claw, a group responsible for her father’s death. Cutey Honey gave us several firsts for magical girls. In previous magical girl anime and manga, including Sally the Witch and Himitsu no Akko-chan, there were no main villains for the girls to fight. Instead of using their powers to fight for good, they were generally used to solve everyday problems. Cutey Honey was the first magical girl series to give us a defined antagonist and out-of-the-ordinary obstacles for the heroine to overcome. Thanks to this series, we were also introduced to the transformation sequence, where the heroine changes from an ordinary girl into her hero form, much like Wonder Woman would do when she did her little spin. Even though this wasn’t the first instance of transformation in anime, this was the first instance when a notable amount of screentime was given to the transformation itself; previously, it was virtually instantaneous. As Honey shouted her battle phrase “Honey Flash,” she would transform from a young girl into a warrior with a curvy physique. 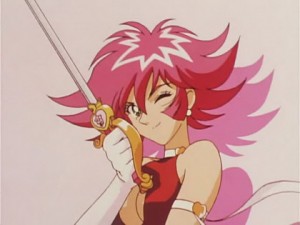 Magical Princess Minky Momo was another early magical girl anime that didn’t feature a prominent villain. Momo is a princess from a fairy tale world which lies in the sky or at the bottom of the sea (depending on if you are watching the original series or any of the OVAs), but in either case, her land is in danger of disappearing because people on Earth are losing their hopes and dreams. Sent from her land, Momo takes the form of a teenage girl and must help people find their dreams. She does this by using her magical powers to change herself into a form that suits the situation such as a veterinarian, an airline stewardess or police officer. Momo is also accompanied by her three talking pet sidekicks: Sindbook, Mocha and Pipi, which take the form of a dog, monkey and bird respectively. These were the first instances of animal sidekicks who could talk with the magical girl. If you have ever wondered where those annoying talking animals in anime originated, you can thank Magical Princess Minky Momo.

The debut of Magical Princess Minky Momo was also a big turning point for magical girls because this was also the point when it started to become its own genre. Beforehand, almost all Magical Girl anime was produced by Toei Animation, so it was more of a Magical Girl franchise, but that all changed when Ashi Productions made their magical girl debut.

Once Minky Momo appeared, the floodgates began to open. In anime, the 80s were a time of experimentation and a time where anime was beginning to have more of a global and cultural effect; it was also a time where other studios were trying their hand in creating their own Magical Girl series. Most notably, Studio Perriot released Creamy Mami (which sounds more like the title for an adult film), Magical Emi, Persia, and Pastel Yumi.

Creamy Mami was the first Magical Girl pop idol. When main character Yu Morisawa helps out a group of aliens, she is given a magical wand which she can use to turn from her 10-year-old self into a 16-year-old girl; however, she is only allowed to have this wand for a year. One day, she is brought on TV and asked to sing; she uses the wand, which also improves her singing, allowing her to become a hit idol. Along with the TV show, Creamy Mami was also used to try and promote Takako Ohta who portrayed the character of Yu and even sang the theme song to the anime. 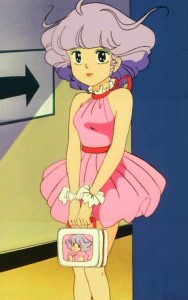 It was around this time that it became standard for a magical girl to receive her powers from a cute talking animal or a magical item, and magical girls up until this point were solely classified as shojo manga or anime. But the next series added a bit more action, opening up the genre to a wider demographic.

The 1990s were a time for a change in attitude for many aspects of the entertainment industry. Music around the world was transitioning from the lightheartedness of the 80s to the grunginess of the 90s. Meanwhile, changes were coming in the anime world as well, and not just for the Magical Girl genre. To spearhead this movement, we were introduced to the group known as the Sailor Scouts (Sailor Senshi in Japanese), a group of teenagers whose main duty was to fight and defeat otherworldly beings bent on stealing peoples hearts or spirits or energy (depending on the story arc). And the leader of this group was the bratty, spoiled, lazy and unmotivated Serena (Usagi in the original Japanese). 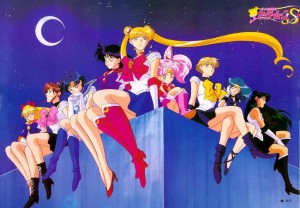 Sailor Moon is quite possibly the most popular and widely known magical girl series–and for good reason. Not only did it finally pull the elements of the genre together, but due to the successful marketing, not only in Japan but also in North America and other parts of the world, everybody wanted to get their hands on this series. We were also given many new tropes now common to the magical girl genre including having a group of girls who fought alongside each other, rather than a single heroine, and having the transformations be less about the age changes and more about the costumes and outfits they wore. With each step of the transformation, the Sailor Scouts outfits would become increasingly prettier and frillier. There is also something to be said for Sailor Moon’s longevity and influence as it is still prominent today with the release of video games, musicals, live actions adaptations, toys and even a series reboot.

It is thanks to Sailor Moon and its predecessors that the magical girl genre is as strong as it is today. With the release of other popular magical girl anime such as Wedding Peach, Cardcaptor Sakura, Pretty Cure, Nurse Witch Komugi, Tokyo Mew Mew, Mermaid Melody and even more recent ones like Madoka Magica, we are able to enjoy a genre that makes us all wish we could find a magical item and transform into a super magical being, but it doesn’t stop there. With the evolution of magical girls we are starting to see new trends that are changing the rules, such as the magical boy.

While there is some debate over whether or not the magical boy genre exists, several modern and contemporary shows fit this mold; there are anime/manga out there that rely on the tropes set up for magical girls, but feature a male lead. Two prime examples of this are DNAngel and Negima! Magister Negi Magi.

Negima relies on the concept of some of the earlier magical girls like Sally the Witch as he is born with his powers and is thus naturally a magic user. He is ten years old and must use his magic to help him become a respectable middle school English teacher while fighting magical threats and monsters all the while trying to find clues as to his fathers mysterious disappearance. It also takes a bit more from the early magical girl’s because Negi uses his magic not only to fight evil, but he also uses it to help with the various “normal” problems that arise from being a ten-year-old middle school teacher. 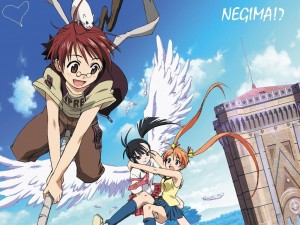 DNAngel is a little harder to distinguish because the main character Daisuke was born with powers, but he doesn’t realize them until his family forces them out of him. Daisuke was born with a weird genetic stigma that, when he has romantic thoughts about his crush, transforms him into Dark Mousy, an angelic thief that steals rare arts pieces because they have dangerous powers. DNAngel also features a rival magical boy who transforms into Krad, antithesis to and nemesis of Dark. 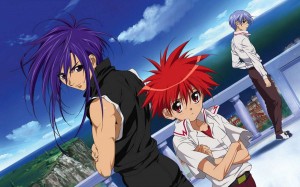 With the global influence that anime has, many other non-Japanese cartoon studio’s have tried their hand in the magical girl genre. In the Americas, we have been blessed with series such as Trollz, Wildfire, Gem and the Holograms (which was animated by Toei) and Wonder Woman and the Star Riders. Even Europe gave us a few like the popular cartoons Winx Club and W.I.T.C.H.

The magical girl genre is almost as old as anime itself and has grown and evolved alongside it all together. From humble beginnings of innocence to the bratty teenagers who now hold the torch and everything in between, there are no signs of magical girls losing their powers anytime soon. With so much more room to grow we are seeing the results of experimentation and genre hopping that is allowing this genre to continue indefinitely. Hopefully you have learned a little more about magical girls and maybe even found a few new series to read and watch.

Is there anything in particular you love or even hate about Magical Girls? If so, let us know in the comments below.