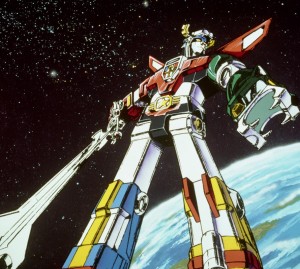 When I was a young anime fanboy, I had two dreams. The first was that someone would invent the real Yu-Gi-Oh Duel Disk so that I could school my friends with holographic constructs, and the second was to be able to pilot my own skyscraper-sized robot. Since I knew the Yu-Gi-Oh one would never happen, I still hoped for the robot. Even now, I’ve grown up, but I’m still hoping. Since my childhood of the nineties and way before that, anime has been populated by robots and mechanized beings that have destructive powers and make us all wish that we could have our own.

While many people know the mecha genre thanks to the influential Gundam Series, it was decades before that robots started their long journey to what they are today. Before delving into the tangled mess of mecha anime history, it is important to note that there are two main subcategories:

Super Robot: Super robot is a genre that spits on the laws of physics for a more surreal and exciting adventure. In super robot anime, you usually see multiple machines combining to form an ultimate form. These robots are controlled by the pilot’s determination and resolve, although sometimes the robots are sentient, and the pilot will usually shout their attack name while the robot deals some serious damage.

Real Robot: Real robot is the complete opposite of the super robot because, even though they’re not grounded in “real” science, they still follow some of of laws of physics. The robots in the real robot genre have distinct limitations and will malfunction, and they are generally used as war machines. Real Robot tends to focus on darker themes and doesn’t hinge on super heroism as much as the super robot.

Breaking it down further, there are four main types of robots that are usually seen in mecha anime:

Sentient: Sentient robots are self-aware and can move, think and feel on their own. How a robot gains sentience varies from alien technology (Transformers) to artificial intelligence (Boomers in Bubblegum Crisis) and from magic (Brave Fighter of the Legend Ga-Darn) to disembodied human souls (Neon Genesis Evangelion)

Wearable: Wearable mech is the equivalent of wearing suit of armor, except it has robotic properties. Armor of this type can be put on like the Hardsuits in Bubblegum Crisis or the user can actually transform into the armor itself as seen in Android Kikaider

Piloted: Piloted mechs are the most common robots you see in the mecha genre. A person controls the robot from the inside and pilots the robot like a vehicle. Famous examples include the Gundam series, The Big O, and Voltron.

Now that we know a little more about the inner workings of the mecha genre, it’s time to dive into its long history going all the way back to the 1950s. 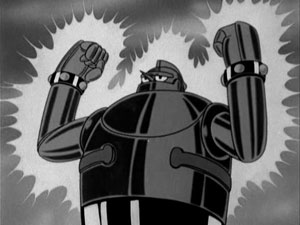 In the previous History of the Genre, we discussed a man by the name of Mitsuteru Yokoyama, who created the first magical girl anime known as Sally the Witch. In addition to this, he was also the creator of the first mecha manga/anime Tetsujin-28-go (known as Gigantor in the U.S.A.). The show is set at the end of World War 2, and a scientist is trying to create a robotic war machine to protect the Japanese empire. After 27 failed attempts, he finally creates a three-story robot, but by the time it is completed, the war has ended and he soon dies of a heart attack. After his death, the robot, which he names Tetsujin-28-go, was inherited by his grandson who remotely commanded Tetsujin as it fought against villains and other robots. 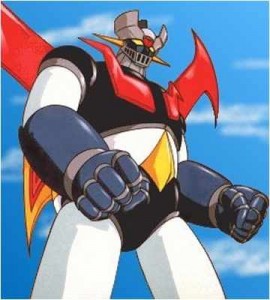 Mazinger Z was one of the first piloted  super robots. Created by Go Nagai (also famous for Cutie Honey), Mazinger Z tells the story of Kouji Kabuto who fights to save Tokyo from the henchmen of the nefarious Dr. Hell. In order to control Mazinger, Kouji had to pilot a tiny hovercraft into the head, where he could command full control of movement and weapons. Mazinger had the ability to fire eye lasers, heat rays from his chest and a rocket punch. Mazinger Z gave us two important contributions to the Mecha genre: the first being that the hero pilot would yell his attack as the robot performed it (a staple in many anime and games now); second, it sported the first female-figured super robot known as Aphrodite A whose only attack was shooting rockets out of her chest. In the early stages of planning for Mazinger Z, they were playing around with the idea of having different machines combine to form Mazinger. This was ultimately thrown out, but was eventually used for Getter Robo.

Imagine a world where dinosaurs survived mass extinction and still lived to the modern age. Now imagine that those same dinosaurs could pilot weaponized robots and that three ordinary teenagers must team together to take on the the dinosaurs and their Mechasauruses. This is Getter Robo, the anime that gave us the first combining super robot. The three teenagers each piloted robots designed in the form of an eagle, a jaguar and a bear, and the piloted robots could fit together in three different combinations depending on the situation. The three forms were Getter 1, which was balanced overall and used for flight, Getter 2 which was super fast and used for grounded combat, and Getter 3 which had super strength and was used for battles deep underwater. Getter Robo created the mold that most combining super robots follow, from the magical 80’s with Voltron (which itself is an edited version of both GoLion and Dairugger) all the way to this day with the more recent Aquarion anime. 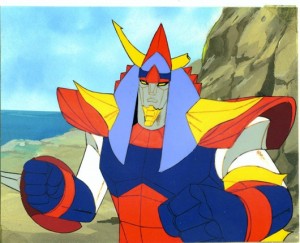 Brave Raideen, a story of a young boy named Akira, descendant of an ancient race from the lost continent of Mu. Given his mystic heritage, he is the only one who can pilot the equally ancient Mu Robot, Raideen. Using Raideen’s arsenal of missiles, a shield, a sword, and even a bow, Akira must fight and destroy the demons that are attacking Earth. Raideen is one of the most important robot mechs because he gave us the one thing that launched many successful toy lines–the transforming robot. Raideen had two forms: giant robot and “God Bird” which took the form of a jet. This type of transformation was at the time unprecedented because it was the first realistic transformation, as opposed to the more magical, impossible transformations you saw in earlier anime. Brave Raideen was also the first mech anime who was able to reach a mainstream audience in America, and that, combined with the simplistic genius of the transforming robot, paved the way for other cartoons and toy lines, most notably Transformers.

The New Generation: From Super Robot to Real Robot 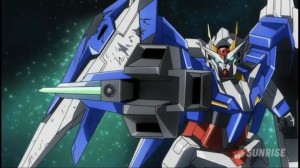 From the creation of Tetsujin-28-go until about 1979, the mecha genre’s primary focus was on the fantastical elements of the super robot. Each show was of the episodic “monster of the week” variety, where the story mainly focused on the pilot or pilots fighting a new baddie each episode, nearly getting defeated and somehow coming out on top at the very end. It wasn’t until the introduction of the Yoshiyuki Tomino’s Mobile Suit Gundam that the real robot genre had begun. Many things changed in the Gundam universe including how the large robots were used and how the plot was structured. Giant robots were no longer seen as mystical creatures but large war machines used in fights between nations. The robots became less characterized and the story started to focus more on the lives of the pilots and those surrounding them. In the Mobile Suit Gundam series in particular, the line between good and evil quickly became blurred, and we saw moments where the hero would actually lose battles instead of finding a deus-ex-machina means of victory. With the mecha genre now being grounded in a more realistic fashion, the floodgates opened and other influential series followed including Super Defense Fortress Macross and, in the west, Robotech (which is also an edited combination of Macross, Super Dimension Calvary Southern Cross and Genesis Climber MOSPEADA)

Robotech’s influence was a little different than most would perceive. It proved that animation of any kind could be marketed to a more adult audience and still be a true success. Robotech dealt with more mature themes for it’s time, including interracial relationships, the terrors and fallout of war, and the deaths of main characters. Ten years later, we were introduced to Neon Genesis Evangelion, which not only dealt with its own mature themes, but it also delved into the religious symbolism and the deepest parts of human psychology. Evangelion deconstructed the real robot genre and showed us what it had evolved into since the days of Tetsujin. 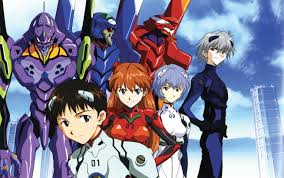 As with all genres of anime, if something stays the same for too long, it starts to become stale, and so the anime powers-that-be are always looking to expand the genre and new and exciting ways. We have seen an emergence of mech anime that completely turn the seriousness on it’s head and turn the entire genre into a joke. The 1996 Martian Successor Nadesico was a direct parody of older real robot anime including Macross, and was directly responsible for bringing a bit of moé and cuteness to the genre. Later on, thanks to the success of Nadesico, we were given more comedy-oriented shows like Full Metal Panic!. As the genre continues to evolve, we can still see the influences that the early shows had, a fine example of this is the spiritually-centered series Genesis of Aquarion, which gives a nod to both super and real robot.

In Aquarion, we are given a diverse cast of different pilots all who have their worlds torn apart by Shadow Angels, immortal beings who seek to harvest humans. Each character is capable of piloting a small vessel, but when three individual vessels combine, they form Aquarion. In paying homage to Getter Robo, the three vessels are different in name and properties, and depending on the combination of the three vessels, Aquarion can achieve different forms and abilities which suit any given situation.

It is not surprising to note that not only is the mech genre in anime evolving in and of itself, but it is influencing and in turn being influenced by different mediums including Western cartoons and movies. In recent years, we have seen American cartoon series try their hand in creating their own giant robots in Megas XLR, which pairs a giant robot with a New Jersey native. 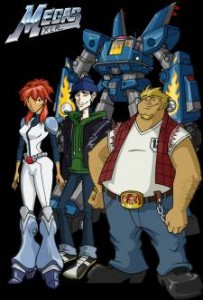 Even though this genre clocks in at over 60 years young, it shows no signs of slowing down anytime soon. I believe that as long as there are people who wish that they had their own gigantic robot, there will be those who will try to make our dreams come true–in fiction anyway. What are some of you favorite aspects of the mecha genre? Are there any series we didn’t talk about that you think influenced the genre just as much as the others? Let us know down below or you might see giant robots invading your neighborhood.