It’s no secret that every series has a fandom. It’s also no secret that the fandom likes to come up with their own little “head canon”. But when a whole community works together to form a head canon, the result is impressive to say the least. This is what we call “Fanon”. Fanon, being a portmaneau of “Fan” and “Canon”, is the term used to refer to fan theories accepted by a fandom as canon.

The fanon, most of the time, stems from the fact most source materials leave room for a wide array of possibilities and theories to be created and thought of. Aside from the actual script, not much is known about the full extent of a given series’ canonical universe, unless it has something such as an official guidebook, as is the case with long-runners like Harry Potter and One Piece, to offer further knowledge.

Let’s kick this analysis off with the most well-known example of head canon: Shipping.

If it exists, there’s a romantic pairing coming from it. Any given series will inevitably have a fan-theory about pairings. If you’re reading this, you lovable folks probably have a pairing of your own for some series, and you’ve most likely run into someone else with a different pairing choice.

For that reason, pairings tend to have a harder time becoming fanon, unless they’re pairings the majority of the fandom agrees on: the so-called “fan-preferred couple”, like ShikamaruXTemari in Naruto. Anyone following Naruto will notice the hints between their interactions, and the shippers run with it all the way to the endzone and back. The anime takes this up a notch and adds a couple of extra scenes further hinting at it. It’s not confirmed, but all those hints and the fact we rarely see them together adds more fuel to the shipping flames. It could be official for all we know, but it’s like trying to guess the next character to be revealed for the next Smash Bros.: All speculation until we get confirmation.

But sometimes, fanon gets confirmed as canon, and that’s where things get interesting. A good example lies within the Pokémon franchise, since the days of Generation 2, the Gold, Silver and Crystal games. Silver, the canon name for the red-haired rival from those games, has a clear hatred of Team Rocket. He states that it’s merely because he hates the weak that band together, fitting his character pre-development. But because the source games never truly delved into it, the fanbase started coming up with their own theories in regards to Silver’s connection to Team Rocket.  The most popular theory sets Silver up as the son of Giovanni, Team Rocket’s founder and, at the time, missing leader. This didn’t have much ground in the actual games, until a Team Rocket member met in Pokémon Fire Red/Leaf Green gave us the following: 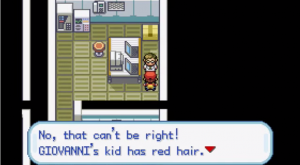 This, while not being an official confirmation, strengthened the aforementioned theory given Silver was, at that point, the only significant redhead male in the franchise. It all remained a strongly hinted at theory until Generation 2 had remakes for the DS in Heart Gold and Soul Silver, where an event in Ilex Forest, should you have a Celebi in your party, takes you to the past where Silver and Giovanni are having a conversation. Silver tells Giovanni “I don’t understand you, Dad!” right before Giovanni goes missing, thus, at last, confirming the theory that’s been around for years. It should be noted, however, that the “Dad” bit was edited out in the games’ English localization. 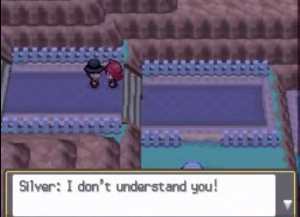 That’s just one of the many theories present within the Pokémon franchise. Another popular example  includes the chronological orders of the main games, which Game Freak confirmed as Gen 1 and Gen 3 happening at the same time, Gen 2 and Gen 4 happening afterwards, followed by Black/White, then Black2/White2, which happens at the same time as the latest games, X and Y. Then there’s the fact that Ghetsis had the Adamant, Lustruous, and Griseous orbs; Cynthia confirmed Platinum‘s events were canon in her appearance in Gen 5, so the player character from Gen 4 would still be in possession of the three orbs. Even the pokédex entries can spawn theories about the world, depending on how their contents are interpreted.  For example, what happens if you breed Yamasks, pokémon who are souls of dead people with the mask being a reminder of the person’s face in life?  Or have you thought about the FireRed entry for Kadabra, which says a boy with extrasensory powers woke up as a Kadabra?

Another good example of fanon becoming canon lies in the ever-popular Vocaloid. With the colorful characters, cool designs, and music videos all over YouTube, it’s pretty hard to remember Vocaloid is merely a series of voice synthesizer software, and that the characters are there to represent different types of synthesizers.

On the Internet, it’s a completely different story. Fanart and videos tend to portray the wide cast of Vocaloid in all sorts of situations. When thinking of Vocaloid, the first characters that come to mind tend to be Miku, Kaito, Meiko, Luka and the Kagamine twins. Released by Crypton Future Media, these have become the most iconic Vocaloids in the franchise. The general fanon characterization is that Miku is a bright, cheerful girl; Meiko is a hard-drinking party girl; Rin is either hyperactive or a jerk with a heart of gold (or both); Len is the more mature of the twins (but he also often fails at being mature); Luka as a cool and collected lady; and Kaito exists solely to have misfortune fall upon him.  And that’s only in regards to the Vocaloids released by Crypton Future Media. There are many other Vocaloids out there released as different characters, each with a fanon characterization of their own.

But where is the fanon becoming canon, you ask?

For one, a good deal of the aforementioned fanon characterization gets embraced by the creators. For example, Miku’s love for leeks spawned from her popular “Levan Polkka” cover, and the leek would later be officially recognized as her trademark favourite food.

Two canon Vocaloid characters were even originally created by the fandom. Yowane Haku is a depressed counterpart of Miku who is usually off-key when singing, is envious of Miku’s voice and drinks because she feels she’ll never be as good as her.  Akita Neru is another Miku counterpart. As opposed to Miku, Neru is a brash girl who is a sweetheart deep down–a typical tsundere. Both characters were made by people who misused Miku’s voice synthesizer. Haku was created when people tried to use Miku’s voice synthesizer to reproduce her voice and made it come out too off-key, and Neru was created when people made Miku’s pitch too high. Neru is said to represent users who are too impatient or lazy to use Vocaloid correctly and quit half-way through, which shows in her personality.

Crypton Future Media eventually picked on this. The result?

Haku and Neru were made official by Crypton, voicebanks and all, and would later be featured in future Vocaloid media, starting with Project Diva 2nd for the PSP. Can’t get more official than that!

Pokémon and Vocaloid canon may be ever-evolving thanks to fanon, but some series actually thrive as a direct result of fanon. For an example of a series that has truly flourished because of fanon, look no further than the insanely popular Touhou.

Touhou Project, developed by Team Shanghai Alice, is primarily  a series of scrolling shooter games in the bullet-hell subgenre. It is most famous for its insane difficulty, involving complex bullet patterns that could one-shot you, and the fact that instead of having spaceships and warfare vehicles, it has magical girls in gorgeous, frilly dresses. Touhou also has a couple of official side-stories and artbooks, some of them written and published by ZUN, the series’ creator.

But given the massive amount of Touhou fanworks among the net, even by the Internet’s standards, it’s very difficult to tell Touhou is a shooter if you aren’t familiar with it. Touhou is so popular it spawned many spin-offs, including fan animes, fancomics, fangames, and parodies.

Think of any type of creative work, and a Touhou version in that category has most likely been done. There are fighting games, RPGs, and even a soccer game!

How did it all start?

A brief look at TVTropes’ Characters page for the Touhou series reveals a massive cast of characters. There are currently 22 games in the main series, and each game brings new characters to that ever growing cast. As not much detail is given about the characters, it gives room for the fandom to give these characters more development, most of which becomes fanon.  As mentioned before, the same also holds true for Vocaloid.

And a good deal of the fanon in Touhou ends up becoming actual canon. For example, Keine Kamishirasawa, originally regarded in the games only as a “protector of the human village” with the ability to rewrite history as she wishes, has been portrayed in many fanworks as a school teacher, which the second Touhou book confirms as canon.

Another example comes from The Embodiment of Scarlet Devil, where two unnamed minibosses, a green-haired fairy known simply as Daiyousei and a redhead devil known as Koakuma,  had fanon nicknames given to them. ZUN would later take those two nicknames and make them the characters’ official names. Curiously, that was their only appearance in the source games. But that wouldn’t be your first guess if you look at how many appearances they have in fanworks as foils to major characters Cirno and Patchouli Knowledge, respectively.

Koakuma and Daiyousei are better known for their depiction in fanon than in the actual source material, and whenever they’re seen in official works, they’re seen as depicted in fanon. ZUN himself is very supportive of fanworks of all kinds, so it’s not unheard of that many theories and characterizations originating from fanworks make their way into the actual canon.

Fan-theories were present in each of us all the way from our childhood, even if we didn’t realize it back then. From simple guesses about a character or what will happen next in a story, to theories in a wider scope, some of those probably stuck with us as we grew up.

How about you? Do you have any memories of fan theories and rumors you came across? What theories do you have for any series you follow?