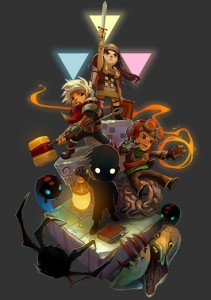 The Humble Indie Bundle has outdone itself this time. In fact, I personally think this is the best Humble Bundle we’ve seen to date. There are five fantastic titles in the lineup this time around.

You can pay what you want to get Amnesia: The Dark Descent, Psychonauts, LIMBO, and Superbrothers: Sword & Sorcery EP for Mac, Windows, and Linux. Pay above the average (which is sitting at $7.25 and climbing as I write this article), and you can also get your hands on Bastion. Just to sweeten the deal, you’ll also receive the soundtrack to every game in the bundle in FLAC and MP3 format. As usual, a portion of the funds raised will benefit Child’s Play and the EFF.

Check out the trailer for Humble Indie Bundle V below. It’s narrated the same person who narrated Bastion and contains a message from Tim Schafer at the end.

If there’s even one game on this list that you’ve ever been interested in playing, this bundle is a great deal. For that matter, I’m tempted to grab one just for the soundtracks that I don’t have yet. What about you?