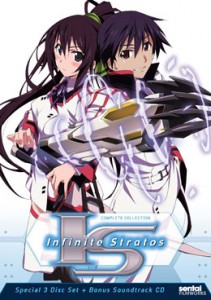 Section23 Films recently announced the DVD/Blu-ray release of Infinite Stratos. The complete collection of this anime comes with special features and a soundtrack CD. At a total runtime of 325 minutes, it is priced at $59.98 for the DVD edition and $69.98 for the Blu-ray version.

The Infinite Stratos is a type of powered exoskeleton that brought about world peace. However, it can only be piloted by women, which has completely changed the relationship between men and women in this universe. It’s been ten years since the IS changed the world, and now it appears that fifteen-year-old Ichika Orimura is a boy who can actually operate the exoskeletons. His own personal plans for the future are rendered irrelevant by this fact, and the government immediately enrolls him in an all-female academy where he must survive the girls and learn to be a pilot.

Infinite Stratos is based on a light novel series of the same name by Izuru Yumizuru. This anime release is being published by Sentai Filmworks. You can learn more about the series at its page on their website.