Risin’ Goat are an enthusiastic group of game developers who are based in sunny Madrid, Spain. The team consists of 10 members–including a kooky looking goat–who are the brains and creativity behind their first major project: A Rite From The Stars. The game is a classic, point-and-click adventure which was successfully Kickstarted late last year. A Rite From The Stars is highly anticipated by fans and looks to do very well upon its release. The developers keep everyone updated via their Twitter and blog with new updates and artwork. After speaking to Carlos L. Hernando, Risin’ Goats game designer, scriptwriter and community manager, he agreed to answer a few questions I have about the game and its background: 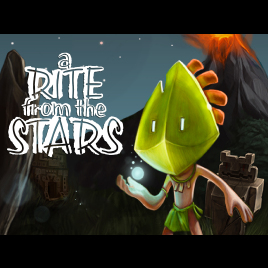 CL: The premise of your graphic adventure game A Rite from the Stars is very unique. What made you come up with the idea of creating ritualistic elements that progress the main character’s journey?

CLH: I’ve always been fascinated by the anthropological concept of rite of passage. In particular, rites involving the transition between childhood and adulthood. Every society, from the ancient to the contemporary ones, performs this kind of rites. In the case of olden tribes, like our Makoas, these rites have a clear structure with clear rules that are really well known for those who take part in them (both children and elders). Adapting this structure to a videogame is simple, even natural. Moreover, it allowed us to implement mystic and animist elements in the game. I think that these concepts has helped us to craft a unique identity for A Rite from the Stars.

CL: This game could easily have been an RPG. What made you decide to use the point-and-click mechanism instead?

CLH: I was going to say that, here in Risin’ Goat, we love graphic adventures, but the truth is that we also love RPGs. However, graphic adventures are special to us. We have fond memories from our childhood when we played a lot of them. To give you an impression, the first game I remember is Maniac Mansion. Nostalgia is a powerful creative force (in fact, one of our trailers is based on it), but we didn’t want to get stuck in the genre’s clichés because of it. We wanted to innovate, look for new paths. That’s why we eliminated the inventory, the traditional dialogue systems and other mechanics. 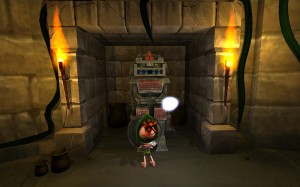 CL: The main character Kirm is described as a ‘mute boy’ from the Makoa tribe. If players are able to achieve enlightenment, so to speak, on mastering the three paths Wisdom, Courage and Spirit, will Kirm find his voice?

CLH: That’s a very good question and a really cool idea. The reason why we made Kirm a mute  was to represent that you don’t need to be perfect to be a hero, to make a difference in your environment. The stars, in their infinite wisdom, are able so see Kirm’s greatness and that’s why they choose him. On the other hand, many people from his tribe simply pity him because he is not able to talk. Do not pity Kirm! He does not need to talk to become a cornerstone of his society! When Kirm completes successfully his rite of passage he will have a voice within the Makoa, but without uttering a single word. Sorry, I think I got emotional with this particular question.

CL: I find it interesting that you have chosen performance-based achievements as opposed to achievements given for completing given tasks. What inspired you to take this route?

CLH: Well, the word ‘achievement’ itself refers to a great feat or deed.

We wanted to go a step further (like in other genres) and reward players who want to fully explore the Island of Kaikala and their challenges.

CL: I’ve looked at the screenshots and artwork and I love what you and the team have done! Something about the world you’ve created reminds me of Crash Bandicoot.

Did any games from that era inspire you?

CLH: Thanks, our artists work very hard! Of course, we were inspired by that particular videogame era, a great one indeed. 3D games were a novelty and its technology was very limited. Getting awesome visuals depended a lot on the artistic teams. Nowadays it seems that everybody is looking for photorealism, but you don’t need it to create a beautiful game or a rich narrative experience. Games like The Legend of Zelda, Banjo-Kazooie, Klonoa, World of Warcraft (this came later) or, as you mentioned, Crash Bandicoot, are an example of this and an inspiration for us. 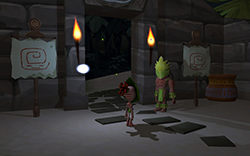 CL: Your development team is based in Madrid, Spain. How big is the gaming industry over there? Are your fans largely Spanish or international?

CLH: The truth is that the Spanish Gaming Industry is not very big and institutional support is… Well it almost isn’t. However, there is a lot of talent and will to work (you can check some examples in the recent Weekly Humble Bundle). That’s the reason why new studios are born every year here in Spain, although it is very tough. You have to use your own resources, work two or more jobs. Fans, on the other hand, are great, both Spanish and from abroad. And their support has been very important to us. It’s really inspiring to meet people who know about The Goat and A Rite from the Stars and encourage you to keep making video games, to keep fighting. So we do. We keep fighting!

CL: Good! Is there anything you’d like to add about the game or your hopes for when its released?

CLH: Although we don’t pretend to revolutionize point-and-click adventures, we want to develop a different way to make them. We believe it’s a genre that, being an old one, has a lot of unexplored potential. And of course, we want a ridiculously huge amount of people to play our game and enjoy it. I also want to add that developing games is our dream. A dream that couldn’t be real without a lot of people who have wanted to dream with us. Including our beloved 811 backers, the people who have helped us makeA  the game (voice acting, creating cool fonts, testing…) and friends and family who have believed in A Rite from the Stars since the beginning.

Carlos also tells me that the game will be released very soon, and although the exact date is not known yet, they are planning for a May release. A Rite from the Stars will be available for the PC, Mac, Linux, Ouya and Wii U. Keep your eyes peeled for a review of the game once its released.

In the meantime, check out the trailer for the game below: 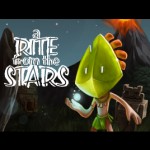