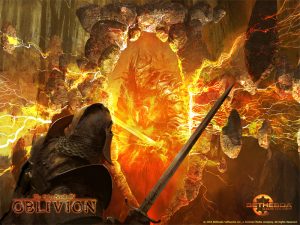 Zenimax, parent company of Bethesda Studios, makers of The Elderscrolls series, has trademarked the term “Oblivion”. The purpose of the trademark is “motion picture film production; entertainment services, namely, providing motion picture theatrical films in the field of fantasy games.”

Out of all the games the Bethesda Studios has made the 4th game in the Elderscrolls series is not my first pick for a movie adaption. The Fallout series or Morrowind (Elderscrolls III) would make a much better film. Here’s to hoping that this is merely a speculative move on Zenimax’s part.