So there are two downsides to living in New Hampshire: The first is that there is tons of snow. The second is that we don’t have any super big conventions or expos or any big nerd gathering, unless you want to drive down to Boston. We do, however, have the local three-day convention which takes place every year in the Granite State, called Another Anime Convention–AAC for short. The best way to describe it is a combination of both major conventions and the smaller hometown ones. AAC attracts people from all over New England by boasting big guests and fun activities, plus its location of Manchester is largest city in New Hampshire. Living in Concord (the capitol), I reside only about 20 minutes away, and don’t need to shell out the money for hotel. It’s a quick drive, a quick breakfast and since I always preregister, it’s a short wait in line. This was also a big year for my friend because this was his first three-day anime convention, and he was excited. So where to begin… 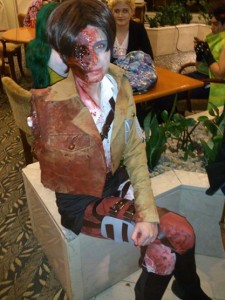 Cosplay is always a good place to start. No matter what sort of nerd convention you go to, there are tons of people cosplaying. With Sword Art Online, Attack on Titan and even Frozen being the big things out there, a huge number of cosplayers were going around as characters from these three, including yours truly. Believe it or not, but there weren’t as many SAO cosplayers as you would think, which made it better on me seeing as how I went as Kirito from the Fairy Dance Arc. There were a few other Kiritos (mostly from the first arc), a couple Asunas and even a Sinnon. From Attack on Titan were your regular Erens and other important characters, but there were two that really stuck out: A guy who hid inside a replica of Wall Maria and a woman who dressed as someone who had gotten eaten by a titan.

This year hosted a lot of great industry guests and artists from all around. Because it is a smaller convention, we don’t get all the great Japanese guests that bigger conventions do, but we still have a good roster. Returning this year was J. Michael Tatum, who’s been in everything but is famous for Kyoya in Ouran High School Host Club and France from Hetalia, and Chris Cason who is most famous for Mr. Popo and Tien from the original Dragon Ball Z. Other big name actors were Lauren Landa (Annie Leonhart from Attack on Titan), Rachel Robison (Fang from Final Fantasy XIII), Patrick Seitz (Laxus from Fairy Tail), David Vincent (Grimmjow from Bleach) and Christopher Smith (Headmaster Cross from Vampire Knight).

Since this year especially had a huge star gathering, autograph lines were very long, so I opted out of them this year, but still managed to interact with some of them by participating in their panels. The first was based off the game show Password. If you are unfamiliar with it, there are two teams and on each team, one person gives a clue and the other person tries to guess the word with the clue they are given. They go back and forth giving clues and guessing until one team gets it or time runs out. One round featured a girl and David Vincent vs. Me and J. Michael Tatum. That’s right I got to play a game with a celebrity. Unfortunately, we lost by a few points. The true highlight of the game was where mid-round the girl’s phone started ringing and she had David Vincent talking to her, just holding a conversation. She had no idea it was him till he said so and you could hear her enthusiasm when she did.

It’s All About the Game Shows 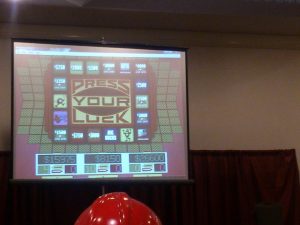 My favorite panels are always the game-show-themed ones. I like them because they test your knowledge, but the way game shows are run you get chances to win amazing prizes. This year was the first year of the AAC edition of Press Your Luck complete with the buttons, the board and the whammies (although there were no funny animations to go with them, sadly). I didn’t get picked to go for initial game, but after it there was extra time, and I got to participate in a short round just to see what it was like… and I got three whammies.

Every convention you go to, most likely you are going to have a Jeopardy!-themed panel, and AAC is no different. One thing that stands out about AAC’s version, though, is they do three rounds over three days. On Sunday the winner from Friday and Saturday compete against the previous year’s winner for a chance to receive a free pass for the next year’s convention. On Friday I had a chance to try to go up and compete, but I got the preliminary question wrong and had to sit that one out. It was a good thing too, because Friday’s champion took control of the whole game. However on Saturday, I redeemed myself and got to play, where I became the champion of the day. All it took was one lucky guess and a couple more right answers while I was in control. For winning, I got the complete set of Heroic Age for BluRay.

Sunday was tough, and by the end of the standard rounds, I was in third place behind by about 500 points. Final Jeopardy!, however, proved to put the ball in my court. I bet all but one of my points on the question “In Dragon Ball Z, during the final battle between Freiza and Goku, how many minutes did Freiza say before Planet Namek had before it blew up?” I was happy because I knew the answer, but was worried the other two knew. (The answer if five minutes, in case you ever find yourself in that situation.) Me and the previous year’s winner got it, but Friday’s champion lost all his points and I got second place, which won me the first volume of Samurai Champloo. A cool fact though, the winner wants to be a staff member next year, so there is a chance that since he won’t need a pass, I’ll get his free pass, anyway.

There is a whole lot more I could throw in, but describing it all would take at least half a length novel. For a quick recap I also participated in some improv panels, watched a voice acting tryout of sorts (didn’t get to participate, too many people not enough time), viewed a couple adult=only panels late at night, and tons of other stuff. I just love going to conventions to get away from the real world and nerd out for a few days.

Been to a convention lately? Do you have any interesting stories to tell? Let us know in the comments below.