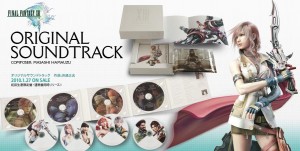 Square Enix continues to treat Final Fantasy XIII as a release of epic proportions, hopefully it will live up to the hype. Andriasang is reporting that Square Enix’s Japanese site for Final Fantasy XIII’s soundtrack has gone live. According to the site, the collection will go on sale starting January 27th in Japan, but right now you can listen to snippets of the first ten songs on the website. From the way the page is laid out, they will continue to release samples and track titles as the release date draws near.

The collection is quite a beast of its own, containing four discs worth of music. There will be two different editions of the soundtrack: a standard edition containing the four CDs that will cost 3990 yen, and a “First Cut” Limited Edition for 5250 yen. The limited edition version also contains a fifth cd with drama tracks recorded by the voice actors and a “special box case.”