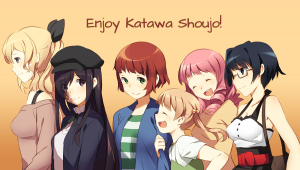 5 years after the initial decision to create a visual novel, Four Leaf Studios has finally released Katawa Shoujo. The game was originally started by a group of people from 4Chan and eventually expanded to a group of 21 creators. Along with the announcement of the release, the developer’s blog (some parts may be NSFW) explained their inspiration for the title:

“The story of Katawa Shoujo is a long one, spanning over a decade. In December of the year 2000, the doujin Schuppen Harnische was released by the artist RAITA of circle Zettai Shoujo. One of the pages in the extras section of the doujin contained a sketch imagining a game about disabilities set in a Japanese high school. If not for later events, that may well have been the end of it. With the sticky in 4chan’s anime board in January of 2007, though, interest was suddenly sparked in the idea within, and the idea of creating this game came about. After months of brainstorming, but little progress, a core development team by the name of Four Leaf Studios was formed in April of the same year. With this, Katawa Shoujo was set on the path to its final creation.”

While the main site is currently down as of this posting, download links are available at the developer’s blog. The game is currently being distributed for free via torrent with direct download links coming in the future. I did a mini-review on the demo that was released in May 2009, but the game has had a facelift since then. Katawa Shoujo is a visual novel set at a high school for students with special needs, and while it has eroge elements, the pornographic scenes can be skipped or turned off for those who just want to experience the story.

At the end of their announcement post, they also announced that the group as it exists now will probably not create another game together, which is unfortunate as the demo that came out years ago showed great promise for a group of volunteers.