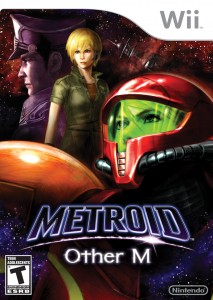 Like all games in the Metroid series, the story follows the adventures of Bounty Hunter Samus Aran. The events of Metroid: Other M takes place between the events of Super Metroid and Metroid Fusion. This puts Other M as the second to last story so far.

The game begins with Samus reliving the death of the baby Metroid by Mother Brain. After surviving the destruction of Planet Zebes, she is picked up by the Galactic Federation and spends an unknown amount of time in a coma. Samus then returns to her life as a bounty hunter. While traveling, she receives a distress call from a Federation “Bottle Ship,” and upon entering the ship she encounters the Galactic Federation 07th Platoon, which was Samus’ unit when she was a member of the Galactic Federation Army. Samus teams up with her old comrades to investigate the source of the distress call. It is soon revealed that the Federation was conducting illegal bio-weapon research, and the research subjects are loose on the ship. Samus must help contain the outbreak and find any survivors.

Metroid: Other M continues several Metroid traditions but also adds new game play options.  The game world consists of multiple regions connected by elevators, with each region sectioned by rooms that require specific power ups to enter.   Samus technically has most of her power ups at the start of the game, but is not allowed to use them.  When Samus teams up with the Federation at the start of the game, she agrees to not use certain weapon systems at her disposal to ensure the safety of any survivors.  As the story progresses, Samus is given permission by the unit commander to use her power ups.   Unlike other games in the series, enemies do not drop items; instead, health and weapons are replenished in two ways.  You can enter a Navigation Booth, which will reload all weapons and restore all your energy tanks.  The Navigation Booth also fills in the map and acts as the save point.  The other option is to employ the “concentration” technique.  This involves Samus staying still for about 5- 10 seconds while her suit restores itself from reserve power.  This technique can also replenish a small amount of health but the health recharge only kicks in when Samus is at critical health.  The amount of health that is replenished is dependent on the number of “recharge” power ups that have been found.

For most of the game, you will be in a traditional third-person 3D perspective where Wiimote is held sideways.  There is some depth to the playing field, but the camera tends to follow Samus from predefined vantage points. In this view Samus can run, shoot, jump, battle and interact with computer consoles. Some attacking controls become context sensitive in this view; so, if an enemy or a projectile get too close to Samus the jump button becomes a dodge button or when an enemy is stunned the fire button triggers an overblast or a lethal strike.  In an overblast, Samus performs a fully charged point blank attack on an enemies weak point.  For a lethal strike, Samus will perform a physical attack on the enemy, the common attack in this form is to grab an enemy by its tail, swing it around, and then throw it into a wall or another enemy.  If you do manage to hit another enemy, it does normal damage to the other enemy making it a very good tactic when surrounded. In third person view, you can also use attacks such as the screw attack and speed booster as well as perform wall jumps to climb elevator shafts.

When this is insufficient the player can enter a first person view similar to the one employed in the Metroid Prime trilogy.  To enter this view you point the Wiimote at the screen, and now Samus can fire missiles or super missiles and look around in any direction.  Some enemies can only be defeated from this view as you need to target a specific body part.  The downside to this view is you cannot walk around so you need to be very quick about your attacks or you will get overwhelmed. Unlike previous games, the power ups for Samus’ main beam weapon stack on each other. For example, you enable the Ice Beam first which allows you to freeze enemies, and later when you gain access to the Wave beam, the animation for firing changes but the attack still freezes enemies.

The controls are very responsive, and the only delay is found in switching from first person to third person view. Yes, the action continues even when the switch is being made. It really wasn’t that much of a delay but when in the heat of a boss battle, those extra microseconds seem to last forever.  I also found it difficult to get the timing down on the dodge ability, but if you can master the timing for dodging then you will become pretty invincible.

Graphically, this is the best looking Metroid game. The Wii is obviously not capable of true realism but it doesn’t need to be. I prefer this style in my games. I would call it “Cartoon Realism” (check out the screen shots at the end of the post). As you play the environments, enemies, and other characters feel alive even though they are definitely rendered to have an anime style to them. The ambient noise and other sound effects enhance this effect. There were no generic sound boards used. I get really annoyed when I hear the Wilhelm scream so it’s very refreshing to see each sound effect made specifically for that instance.

The voice acting was really good. While I didn’t like some of the story line (more on that below) there were no parts of the dialogue that felt out of place. Each voice actor put feeling into each line and didn’t just robotically read from the script.

Metroid: Other M has the distinction of being the first game in the series that has fully-animated cutscenes and spoken dialogue. We finally get to hear Samus and see what motivates her.  The bad part of this is that what I and many others imagined Samus Aran to be was not anything close to what Project M made her out to be.  When you finish the game, all the cutscenes can be played in order to create a full movie.  Unfortunately, if this movie was to be played on TV it would be shown on Lifetime. Through Samus’ interaction with other characters as well as her own internal dialogue, the tough female warrior we all knew became a scared little girl with daddy issues.

Even Nintendo knew there would be this disconnect between what the fans thought Samus would be and what they created.  It was brought up in an interview by Shinesparkers with Nate Bihldorff, senior localization manager for Metroid: Other M.

NB: This is a touchy subject, to be sure. Bear in mind, we’re dealing with a beloved series that’s almost 25 years old, and since Metroid has traditionally been extremely light on exposition, fans have filled in a lot of the blanks with their own imaginations. Samus’ story—her voice, her motivations, everything about her—has largely been a matter of individual perception, especially in the US, where people haven’t read any of the official manga related to her childhood. Mr. Sakamoto is the only one who knows who she really is, and his vision for her and her voice was always going to be different than the character people had built in their heads.

I’ve seen the same comments you have, and while I understand where they come from, I definitely don’t agree with most of them. For me, Samus’s detached monologue speaks to the reticence of a wounded character, one scarred by the tragic events of her childhood. The glimpse of the pain and fear she carries—shown in the flashback scene when she sees Ridley—is not a sign of weakness, but of strength. People who call out that scene as anything but empowering are kind of missing the point, in my opinion—she does end up torching Ridley, after all. There is no courage without fear, in my mind, and knowing that Samus overcomes that repressed terror makes her all the more heroic than someone who plods forward without a hint of humanity.

I do think that Samus’s reliance on Adam’s commands is an important part of her canon as we see later in Metroid Fusion, Samus hates taking orders, and that problem with authority can be traced directly back to the events on the Bottle Ship in Metroid Other M. Obviously her relationship with Adam was complicated, and her confusion about his role in her life led her to put up with a command structure that she ordinarily would have scoffed at. Make no mistake, though—the events of Metroid Other M change her.

I haven’t read any of these official manga that would have prepared me for such a story (that they aren’t licensed in America is a big reason for that), but even so I think it’s a poor story arc.  Imagine if DC decided to give Batman internal dialogue similar to Spiderman’s? That is pretty much what they did to Samus.

The game offers two difficulty levels – Normal and Hard.  You must beat the game once on normal to unlock hard.  Normal difficulty has a very forgiving learning curve and the controls are intuitive.  I never opened the instruction manual and was able to just pick up the Wiimote and play.  As you gain power ups, the game shows a short written tutorial on the use of the new power and this is more than adequate.  Normal difficulty will give just enough challenge without being aggravating.  If you want a real challenge though you have to try Hard Mode.  The only change for Hard Mode is that there are no power ups.  You start the game with 1 energy tank and 10 missiles.  In Hard Mode you will never get any non-story-essential upgrades.  It may not seem that bad, but keep in mind that some enemies cause 2 energy tanks worth of damage per hit; so you can imagine just how hard Hard Mode will be.

Those who have played some of the original side scrollers, the Prime Trilogy, and anyone that enjoys platformers will enjoy the actual gameplay. The mix of sidescrolling and first person shooter is well worth trying this game out.  However, if you are a long time fan of the series and have built up an idea of what Samus is like, you will very likely be extremely disappointed in the way she is portrayed. Overall though the game is well worth trying and keeping.