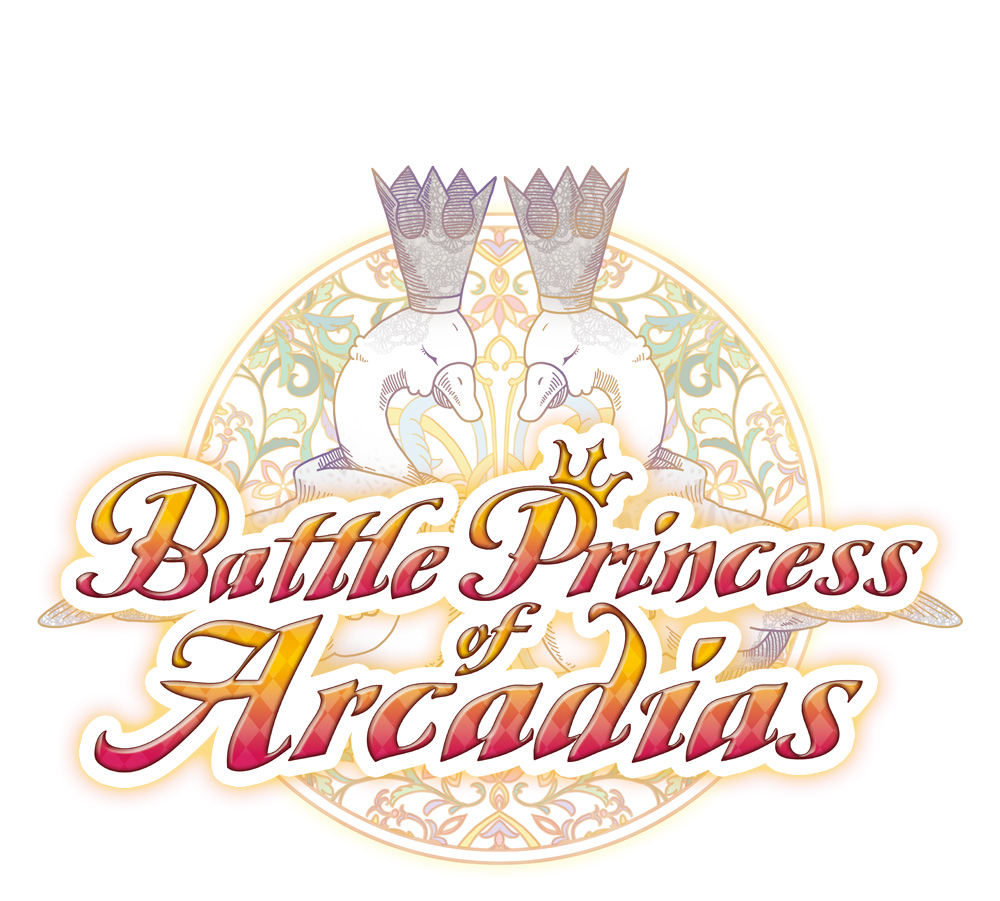 Nowadays, when gamers think of side-scrolling beat-’em-ups with RPG elements and anime-style graphics, they probably picture Odin Sphere. Apollosoft and Nippon Ichi set out to show that there’s room for more than one such title with the recent release of Battle Princess of Arcadias.

In the kingdom of Schwert, Plume, the titular battle princess, leads the king’s army into battle against hordes of monsters to keep the townspeople safe. One day, her squire Dahnel falls in battle and is replaced by a young archer named Raltz. Despite his inexperience, Raltz takes to the job quickly, which is fortunate, as things quickly go awry. What follows is an odd tale, though it does rely on several stereotypes common to anime and manga, some parodied while others are taken straight. The kingdom is besieged by a series of monsters, neighboring armies, ancient weapons and enemies from the past, and it’s up to Plume and her compatriots to hold off these encroaching forces. Despite the constant danger, Battle Princess mixes in quite a bit of humor to the story—sometimes a bit juvenile, certainly, but some of it is genuinely funny. It relies very heavily on the characters to keep things funny and interesting, but some of the most interesting bits come from side story that you encounter during conversations around the castle and town. If you skip those, the story could be very bland at times. These side conversations are really what flesh out the characters, giving a lot of indirect backstory for Plume and Raltz. For example, Raltz (despite being a support character) ends up becoming a reluctant harem leader, as many of the women in the army (including his own “sister”) become infatuated with him as the story progresses. As they talk about Raltz, they share bits of their own past, as well as Raltz’, creating more engaging characters in the process. 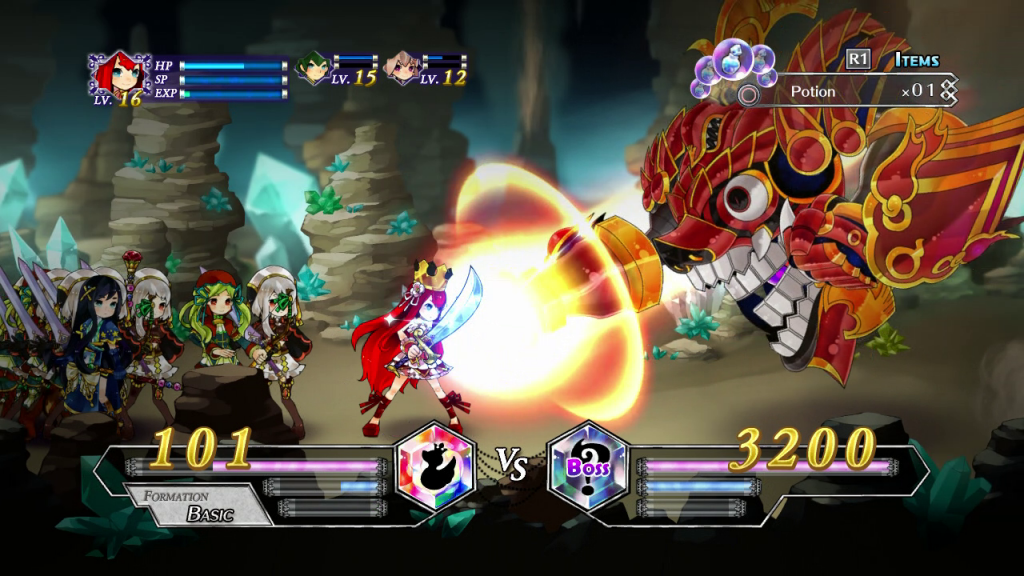 Besides these conversations, the town offers up an item shop and a blacksmith to help equip your team as well as an office for managing your armies. The item shop is standard fare, selling weapons, healing potions and the like. The blacksmith, likewise, allows for the upgrade of weapons, but the upgrade process is more than just adding a couple points of damage here and there. While that is one option, for certain weapons, the blacksmith can add skills to the weapons or even transform them into stronger weapons entirely. Each weapon only has a few upgrade points, which keeps you from just upgrading one weapon until it can one-shot everything in the game, though power-leveling your characters can have the same net effect.

Once you set out from town, your team can choose from an increasing number of stages to fight in as the story progresses. Unlike most beat-’em-ups, where you play as a single character fighting against a tide of enemies as you run left and right, each level of Battle Princess offers one of three stage types. Solo combat is the classic style side-scroller, just you and the enemies, but even here, it allows you tag-team the enemy by switching between up to three characters per level. Mixed in with these battles are two other types: Skirmishes and Sieges. Siege battles are effectively boss battles, where you lead a battalion of troops against a superpowered monster (usually an ancient weapon that has re-awakened). Skirmishes pit your battalions against enemy armies, with victory going to the one who kills off all the other soldiers first. In both of these modes, along with fighting as your own character, you also issue commands to the troops to attack and defend as the ebb and flow of battle rolls on. Skirmishes add an extra layer on top, as you can also switch between troop types whose strengths and weaknesses play out in a more complex version of rock-paper-scissors. The variety provided by the battle system is the greatest strength of Battle Princess of Arcadias, but the game unfortunately shelves Siege and Skirmish battles in favor of solo combat as the game winds down. A little more balance between the battle modes, and slight adjustments to the command-issuing system, would have made for an even better experience. At the end of each battle, you’re given a grade, and higher grades mean better rewards. 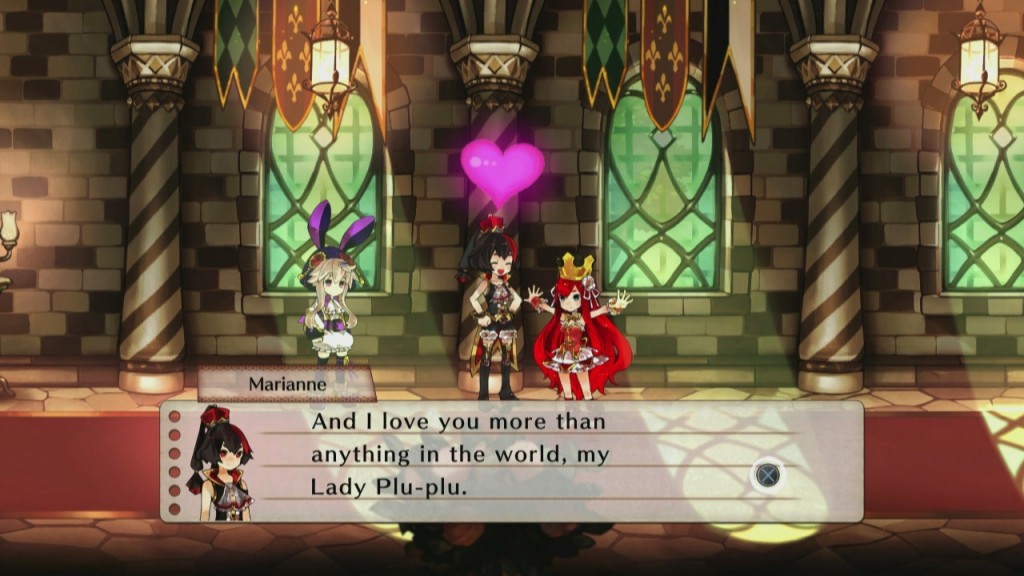 The game’s 2-D graphics are nice, other than the occasional case of pixelation, and incredibly colorful. However, it relies heavily on palette swaps for the various monsters (and even bosses), which is a little disappointing. The character designs are cute, though, and the game chooses to play up that angle by having the characters’ emotional expressions accompanied by graphics over their heads. These little pop-ups, in and of themselves, aren’t a negative, but the sound effects that accompany them can get somewhat annoying. Those sound effects are the only real drawback to the game’s audio, though. Most of the voices (Japanese only) are well done and diverse. The standouts being characters like Odette, who seems cute and demure when talking to (or about) Raltz, but her yandere side comes out around other characters and in battle. And the soundtrack is a solid mix of soft pieces to set the mood and high-energy J-pop-style pieces.

Overall, Battle Princess of Arcadias is an amusing game to hack, slash, and shoot your way through. The story probably won’t grab gamers who aren’t already fans of anime or Disgaea and similar titles, but for those who enjoy that sort of thing, it’s worth taking a look at.