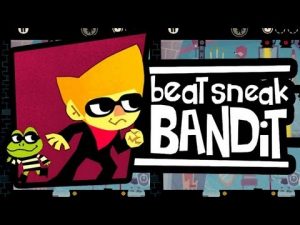 Originality. A very rare quality indeed. Games these days tend to be a slightly tweaked version of their counterparts; they may look and feel different, but they’re essentially the same. So when something original comes along, you know you’ve gotta check it out. But where to start, you ask? Well, rest assured because Simogo’s heard you. With its latest iOS title Beat Sneak Bandit, Simogo delivers a rhythm based puzzle game that just blows you away with its charm, presentation and sheer originality.

The game offers a simple premise. You play as Bandit who is (you guessed it) a bandit. When he discovers that all the clocks from the world have been stolen by the evil Duke Clockface, he and his sidekick Herbie set out to get ‘em all back. Yeah, the premise is rather silly, but it’s just part of the fun.

The game’s tutorial level does a good job of easing you into the experience, but more importantly, it explains the game’s unique control scheme. The game plays a rhythmic beat throughout each level, and you are expected to listen to it carefully, get a good hold of it, and tap on the screen to maneuver Bandit. The presses must be in sync with the rhythm to make Bandit move around, and it’s essential that you scout the level to familiarise yourself with the movement patterns of everything on screen, which include a security guard, overhead flood lights, and movable platforms. Getting caught will end the level, while also offering you an option to immediately retry the level.

So it’s just as well that there is no time limit to complete the level. Each level has 5 clocks, the main one, the one with the red ribbon of course, collecting which will end the level and 4 additional clocks. You will be awarded stars at the end of the level based on how many clocks you collect. These extra clocks can be used to unlock additional levels called the ‘Shadow’ levels. The game has high replayability with all the stars to collect and the extra levels to unlock. The game is split into 4 chapters, each one having ten levels and 4 unlockable shadow levels, leading upto to the finale.

A game with such a unique layout and premise is expected to have an equally captivating gameplay style. Thankfully, Beat Sneak Bandit really shines in this regard. It is as elegant as it is simple. It’s conclusive evidence that even a simple one-touch control scheme can be immensely fun (Is it necessary to have 3 sentences saying the gameplay is good without actually giving any details?). Besides moving to the beat, Bandit can also turn when facing walls, climb steps or even press buttons. Patience is the name of the game here, since the general movement as well as each one of the aforementioned actions rests on your ability to listen and follow the beat and tap accordingly. While you won’t be punished if you happen to miss a beat, pressing out of sync while near a collectible clock will destroy it, rendering you unable to pick it up. The cleverly simple gameplay will keep you hooked and it ensures that there’s never a dull moment.

The fantastic presentation is another feature that warrants your attention. Each of the 4 chapters has its own set of thematic backgrounds, starting with a mansion hall, a basement, a laboratory and finally the clock tower. The 2D visuals are pleasant, charming and easy on the eyes. The color palette has been carefully chosen to complement the overall artistic design and make each frame jump with life. There is a certain degree of finesse in the way the visuals have been presented that most 2D based games lack. To truly understand what I am saying, have a look at the screenshot below.

What’s a rhythm puzzler without good sound design, right? Well Beat Sneak Bandit has that covered too. Each chapter, along with the thematic visuals, also has simple, fluidic electronic sounds as a rhythm and each level has a variation of the said rhythm in terms of the tempo or the order in which the objects in the level go off. Each of these objects have a distinct sound as well. The lights going on and off, the platforms extending out and retracting back in, the cops turning around, everything is accompanied by an audio cue that fits right in with the overall rhythm pattern. The sound design is sublime and unbelievably addictive. I quite often found myself humming the theme music from time to time.

Couple the presentation with devilishly clever level design and you’ve got you a winner. The extremely well thought out level layout, including the placing of the objects and their synchronised rhythmic movements is superb. Simplistic yet challenging, each level has been designed meticulously providing just the right amount of challenge, demanding a couple of retries but never making it feel forced. The superb boss fight in the finale is tricky and requires quite a lot of replays. Although it wanders dangerously close to being frustrating, in the end it’s a lot of fun.

Each of the single screen levels should not take you more than a couple of minutes and you’ll end up finishing off the game within 2-3 hrs tops. This may or may not be a bad thing, but given that it’s an iOS game, it’s not that big of a deal especially since the multiple replays you’ll make to score more and more clocks should keep you busy for a while.

Beat Sneak Bandit is an absolute delight. Everything about the game screams awesome! From the cute and striking art style, to the rhythmtastic controls and the fascinating sound design, it’ll have you charmed to the end. It is an ingeniously crafted title, and also one of the most innovative and original games I have played and to top it all, one of the best. At $2.99, it would be a shame to pass it up!