Originally inspired by an illustration from artist Ryohei Fuke and a song by J-pop group Supercell, Black Rock Shooter has become a media franchise over the past few years. An original video animation, a full anime series, and several manga series have all been based off of the raven-haired character. Now, two years after its initial Japanese release, Black Rock Shooter: The Game has finally been released abroad. An interesting blend action and RPG elements, Black Rock Shooter has a few unique ideas that are bogged down by a bizarre and convoluted storyline.

The year is 2051. For nineteen years, humanity has been at war with a group of aliens, led by the Seven Apostles. It has not been going well. In fact, when the players take control of the titular Black Rock Shooter, there are only twelve humans left in the entire world. She must join forces with the surviving humans and help them fight back, while at the same time trying to recover her lost memories (She’s a recently awakened messiah figure; of course she has amnesia). All of these elements could come together to form an engaging narrative; sadly, they don’t. The main plot is extremely shallow, with very little to draw players in. Most of the drama happens off-screen, while BRS is busy blowing up robots. There is little in the way of closure, as well; players will have just as many questions about the game’s world and events as when they started. For example, where do the aliens come from, and why do they want to wipe out all of humanity so badly? And why does BRS’s left eye catch fire every time she starts a mission? At first I thought that my dissatisfaction with the story was due to being unfamiliar with the source material. However, I’ve since learned that Black Rock Shooter: The Game‘s story is unrelated to the rest of the franchise, which means that any questions players have will go unanswered. 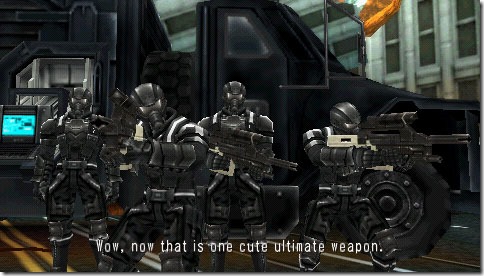 Probably the biggest problem with Black Rock Shooter‘s story comes from the characters. The group of soldiers that BRS joins upon awakening (just to reiterate, these are the last 12 humans on the planet) are presented as the most basic of cliches, and their interactions between themselves  and players consist mostly of bland and predictable fluff. If you could guess that there would be a gruff commander with a tragic past or a gung-ho soldier who constantly loses his temper, well, give yourself a cookie. The dialogue is similarly underwhelming; outside of BRS and someone introduced about halfway through the game, most characters, friends and enemies alike, only have a couple of lines of dialogue for the entire game. The worst part is that I simply didn’t care about a single one of them. Players are given so little to form connections with, that when drama does start occurring, it has no weight or meaning at all. Its not a good sign that, during a scene that was supposed to be shocking and sad, I couldn’t help but laughing out loud.

Luckily, its clear that much more work was put into Black Rock Shooter‘s gameplay than into its story. The game is divided up into several stages, each of which has about six missions. Save points are generously dispersed through each level, and upon dying in combat, players are given the option to restart the mission while retaining any skills or items collected. This makes the game very friendly to players who are on the move, allowing them to make progress in short bursts. Missions typically consist of players making their way through a series of corridors and open areas that are full of visible enemies. Upon contact with an enemy, the game switches  to a third person shooter, in the vein of Sin and Punishment. Players use the analogue stick to aim at enemies and the square button to fire. The X button guards, while the circle button initiates a dodge move, which is the only way to move during battle. Pressing the right shoulder button brings up a skill menu, with each skill have its own cool-down timer after use. A overheat gauge at the bottom adds a bit more depth, forcing players to manage how much shooting and dodging they can do without leaving themselves exposed and vulnerable. This layer of strategy keeps combat from getting stale, although I do wish enemies had more varied attack patterns (most have only one or two). The boss fights are the highlight of the game, providing a decent amount of challenge and forcing players to switch up their strategies. 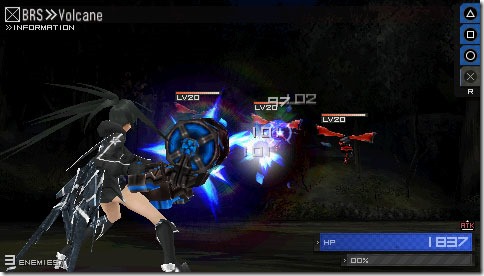 While combat is satisfying in and of itself, Black Rock Shooter provides additional incentives to players through the Challenge system, which tasks players with completing different objectives during normal play. These tend to be along the lines of “kill x number of enemy y”, and successfully finishing one unlocks new skills, stat boosts, alternate outfits, or items for the Gallery. The constant influx of skills helps players experiment with combat to find their own style, although there are a few combinations that seem a little unbalanced (Aggressor plus War Hammer will easily wipe out most groups of weak enemies). These extra challenges should give players who’ve already finished the game additional replay value.

From an audio/visual standpoint, Black Rock Shooter does an above average job. The character models are fairly detailed and animate smoothly, and the overall art style is unique and interesting. During their quest, players will visit burned out cities, overgrown forests, frozen tundra, and more. While I wish that the areas had a bit more life to them, I suppose that is the entire point, and they serve their purpose well enough. The general enemy design is creative, although the lack of variety means that players will be fighting palette swaps of the same enemy types over and over again. The boss models are the most exciting, visually, with odd color-coded designs that make the lack of character development all the more unfortunate. While I can’t really judge the voice work, due to the game only being a subtitled version of the Japanese release, none of the voices seem to be mismatched or inappropriate. The field music, consisting primarily of low-key electronic tracks, is quite enjoyable, while the battle themes are suitably fast paced and exciting. Ironically, the music does a much better job at conveying emotion than anything else in the game, with a couple of pretty, melancholy piano tracks signaling when its time for the player to care about what is happening to the characters.

Black Rock Shooter is not a terribly long game; my playthrough lasted between 8 and 12 hours. However, this keeps the combat feeling fresh right up until the end, and the Challenge mode will give players plenty of incentive to pick the game back up. Overall, I would recommend it to any anime fans who are looking for a new action-RPG, especially considering its budget price. I will give fair warning though, that anyone who appreciates well written dialogue, closure, or a story that makes sense will be quite disappointed. If you can ignore that flaw, I would say give it a try.