Disclosure Note: Two things to get out in the open.   First, this review is based on a preview copy sent to us from NIS America.  Second, We typically only write our reviews after beating the Main Storyline/Final Boss of any game.  I have not done that here as I wanted to have a review out before launch, but I feel I have played enough of the game to get an accurate assessment of its quality.  Okay, so on with the review.

Cladun: This is an RPG! is a retro (8-bit) style dungeon crawler for the PSP (via PSN Download).

Some say, because the treasures were there.
Or because the enemy must be defeated there.
Or because dreams are made there.
This “there” can be at the bottom of a well,
or even behind the door of a public toilet.
Anyone can reach this place,
yet it is connected to many different places.
People call this world, “Arcanus Cella.”

The story of Cladun revolves around several main characters. Each has come to the world of Arcanus Cella to achieve a goal.  Some have come to hide, others are in search of treasure.  Others still had nothing better to do. In keeping with its “Old School” feel the story line is pretty sparse and simple. While any other modern game would get points deducted for this, in this case I feel it brings more authenticity to the title.

For me this game really is Nintendo hard

No, seriously, I mean the minigames are hard. Like, Nintendo hard.

TV tropes has a good list of what makes a game Nintendo Hard and Cladun hits many of them. Although they also give remedies to most of them as well.

There are lots of enemies (and lots of projectiles) that are hard to hit or dodge and they have surprise attacks that can only be avoided by sheerest luck or memorizing their locations.  You pass through malevolent architecture that poses a constant danger of death even when the player proceeds as cautiously as possible.  Your hero can survive very few hits.  (This is rectified with proper strategy using the magic circle.  Explained in more detail below.)

Cladun thankfully decided to skip the lack of save points and lets you save at anytime you’re not in the dungeon.  NIS has also been merciful and you simply leave the dungeon upon death.  They even “reward” death a bit by letting you keep half of your earned experience and gold.  All items found in the dungeon are lost though.

There is no way to adjust the difficulty.  I could use a lower difficulty setting as my reflexes are not as good as they were when I was playing the original Nintendo.  This can lead to slow progression through the game, and it can also lead to a lot of frustration.  The only recourse is to get quicker reflexes, spend a little longer grinding your levels and HP bonuses until it doesn’t matter that you’re getting hit, or master that Magic Circle.

The default speeds for attacks, jumping, and blocking are pretty slow, but on the plus side accessories can be purchased or found that increase their speed.  While you can try to dodge attacks by jumping, it’s very difficult.  You can also attempt to dodge traps by jumping over or sliding under them. 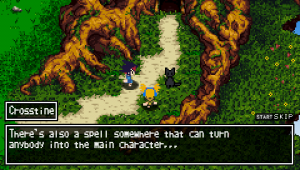 As you progress the story, the “Tavern” will open up and give you access to the barkeeper Dotache.   Talking to him allows you to create a new character.  You can pick the name, job, gender, etc.  You can also use the included pixel editor to make your character look like whatever you like plus the editor can be used to change the appearance of the final boss! If you have ever used any sort of paint program on your computer, you’ll know how to use the program without the tutorial.

Class changing becomes available later in the game.   In order to “Class Change,” that character must be at least Level 10. The character will become level 1 again but will retain some of the stats from the previous job.  The greater  your level at the time of class-changing, the greater the stat retain.  All  Magic Circles, magic spells, and abilities you have learned will also remain.

Having only one copy of the game we were not able to test out multiplayer but it is supported using Ad-Hoc mode.  Cooperative or competitive modes are available for up to 4 people.

You eventually unlock a random dungeon where the layout changes each time you enter.  This dungeon is good for grinding for levels and money but not story progression.  In the Random Dungeon, aside from the “exit,” there are also 5 types of “gates.”  Entering these gates will allow you to continue to the next floor without returning to  Arcanus Cella. Depending on the kind of “gate” you enter, monster levels and the rate of item drops and rare titles can vary greatly.

Cladun is great return to some old school roots. Those who have never played a Nintendo hard game are in for a shock as they just don’t make games like this anymore.  Those that miss those days of challenge will love this game.  The game flow works perfectly on a portable system where you may only have a few minutes at a time to put into it.  Overall a very well built game for anyone’s collection.

File under Keep It.