Colonize is another research-project-meets-game by Neil Schmitzer-Torbert and Behavior Games, creators of Quasar Quinn: Escape from Zargnon. Like Escape from Zargnon, Professor Schmitzer-Torbert is using his game to study how people learn and adapt to new systems. The game gives you the option to send usage information back to the creators, who will analyze the data.

Colonize is based on The Game of Life by John Conway, a mathematical model that mimics some aspects of how cells replicate. Building on this idea, Colonize offers four different modes of play with different objectives. In the training mode, of which there are 94 levels to select from, you learn how to place cells to create different colony shapes and maximize cell growth. While there are some instructions in the early levels of training, you’re probably going to learn more by a trial-and-error approach. Once you get the hang of the basics, the game opens up the more challenging modes: Defend, Multiplayer and Contest.

No matter which mode you choose to play, the gameplay is essentially the same. You tap to place or remove a cell from the board and use the minimap in the upper right corner to move to different parts of the board. You can then either hold the play button to advance by one generation or press it and let the game play itself until you pause it again. During each generation, some of the cells will die and others will generate based on a simple set of rules: cells surrounded by less than 2 or more than 3 other cells will die, cells with 2 neighbors will be static, and cells with 3 neighbors will generate a new adjacent cell. Using these simple rules, you solve a series of puzzles, and that’s pretty much how Colonize works. 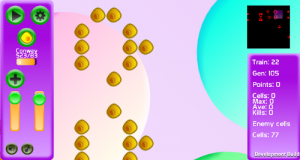 Defend is a single-player mode where the game pits you against pre-set formations of “toxic” cells which also replicate and block your cells from growing normally. You are given a number of cells to culture and then transfer around to kill off the toxic cells. You earn points based on how quickly and efficiently you can eliminate the opposing cells. Currently, there are 131 levels to play in Defend, but there may be more added in future versions of the game. One of the nice things about the defend mode is that if you find a solution you would like to share, you can save a replay of the level and upload it for other players to see. On the flip side, if you need help, from the main menu you can go to the watch menu and download replays to help you get through some of the levels. The ability to share replays is one of the things about this game that really helps remind you that it’s as much about the learning process as it is solving puzzles. As you complete levels, you earn flasks, which translate into more starting cells to place. This also increases the maximum number of cells you can hold, the number of cells you can pick up per generation, and gives you other added functions.

Multiplayer mode is only playable via Kongregate, where you can sync the Android and Kongregate versions of the game. In multiplayer mode, you play against another live person and attempt to eliminate them from the stage. Otherwise, it has the same basic functions as the defend mode. The contest mode offers new challenges from the game’s creators on a regular basis. Rather than a single level like defend mode, you must prepare your cells for 3 or more waves of toxic cells at a time. These contests are more reminiscent of a typical defense game. As a result, you have to make sure you don’t use up all your cells to beat one wave, otherwise you are left without enough resources to beat the next one. Colonize also offers a sandbox mode, which is the best way to figure out exactly how the cells grow and function. In sandbox mode, you can place as many cells as you would like to see the replication patterns and create different designs with the cells. These designs can also be shared using the save and share functions. 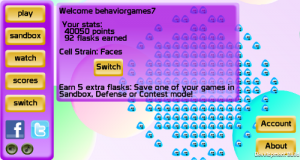 There are a few glitches here and there in the game. Sometimes it placed cells next to where I tapped and I had to undo the previous move, and there were occasional graphical glitches where some of the text did not clear between screens; however, overall the game seems to run pretty smoothly on a Samsung Galaxy S III.

If you’re playing the game in short bursts, which is the best way to approach Colonize, the sound effects and music are bearable, but they get old quickly. The music, created by Kevin MacLeod (who also provided The G.A.M.E.S. Cast theme), gets repetitive, and the limited number of sound effects means you might be turning off the sound if you play for long periods of time. The graphics are also fairly simplistic, using cartoon style cells against a high-contrast pink, green and yellow background. At first it was a little jarring, but after a couple of rounds, you get accustomed to the color scheme.

Overall, though, Colonize is a step in the right direction for the field of research games. There is a free version to download via Google Play with the option of paying for a full version that removes ads and gives more options for cell graphics.  If you like defense/puzzle games, it is certainly worth the look, and you’ll be helping with research, too.

Disclosure: This game was reviewed using a copy provided by Behavior Games.