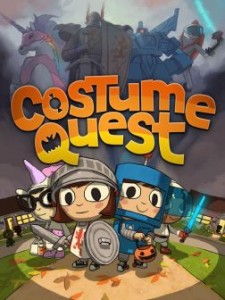 Costume Quest is an  Adventure/Role-Playing game that takes place on Halloween night.

Reynold and Wren are fraternal twins, brother and sister with Wren being older by 10 minutes. The pair are new in their neighborhood, and their mom thinks that they should use their time trick-or -treating to make a few friends.  Before they leave for the night, Mom puts one of the siblings “in charge”, you are then given the choice of making Reynold or Wren the playable character, who then dons a sweet robot costume while the other dresses as a piece of candy corn.  Soon after leaving the house, you find that real monsters are stealing all the candy in town.  One of the dumber of the monsters mistakes your brother/sister for a real piece of candy and kidnaps them!  Oh boy are you gonna be grounded if you can’t rescue your sibling before curfew! 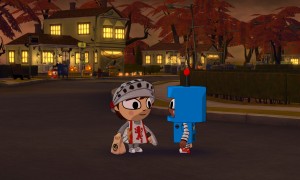 Battles in Costume Quest are turn-based.  When attacking or defending, a quick time event occurs in which you must complete the onscreen instruction in the required time limit to either increase damage (attacking) or decrease damage (defending).  When attacking in the Unicorn costume you have about1.5 seconds to hit the A,B, X, or Y button to increase damage.  The button you have to hit changes each time so you need to pay attention. The same thing happens on defense; you have about1.5seconds to hit the A,B, X, or Y button to decrease damage.  At the end of battle, experience and candy are earned.  Like any RPG, when you level up your base stats increase, but  Costume Quest has a level cap of 10.

Costumes can be upgraded by the use of Battle Stamps.  They look like postage stamps and you attach them to your costume to “jazz them up”.  Some stamps increase base stats (offense/defense, critical hit rate) and others add attacks or abilities. These new attacks and abilities all have a Halloween theme to them. Witch’s Brew adds poison attribute to your attacks, and TP attack does damage and stuns your opponent. 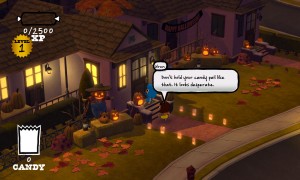 Of course, your asking yourself “How do I get my hands on some Battle Stamps?”  Easy.  You buy them with candy which is the currency used by little children. Now you may ask “”How do I get my hands on some candy?”  If you are asking that then you must have had a horrible childhood.  It’s Halloween, of course you knock on peoples front doors and say “trick or treat” then they give you candy, DUH! But since there are monsters trying to steal all the candy in town, some have taken over the neighborhood houses; so, when you knock on the door they attack you for your candy. But if you defeat them in battle you get their candy instead. Candy can also be found in Jack-O-Lanterns, mailboxes, garbage cans, or just lying on the ground.

And what game today doesn’t have side quests?  Well in Costume Quest, this takes the form of Creepy Treat Cards, collectible cards of Halloween themed candy, and Hide and Seek games.  Completing your collection of Creepy Treat cards earns you a new costume, and completing the Hide and Seek games will earn you larger candy buckets. And what kid wouldn’t want a larger candy bucket on Halloween?

The game reminded me as a cross between Earthbound (Mother 2 in Japan) and the Good Times with Weapons Episode of South Park (while staying E rated).   The only down side to the game is that it’s short.  The whole thing will take you about 7-9 hours to play so don’t expect a 40 hour epic.  If you enjoy a light-hearted story, nostalgia of your own childhood (assuming you’re too old to trick-or-treat anymore), or just want to play a game that doesn’t depend on gratuitous sex and violence as its selling point, then this is a great game to add to your collection.  Definite Keep.