Madfinger Games, known for their award winning Samurai series of action adventure titles, finally break out into the First Person Shooter (FPS) genre with their latest zombie apocalypse shooter, Dead Trigger. But is it a genuinely well crafted FPS, or does it simply end up being a visually stunning showpiece, quite like Madfinger’s previous outing, Shadowgun? Well, thankfully this time, Madfinger nails the core gameplay mechanics, delivering not just the best zombie shooter on the App Store, but also possibly one of the best FPSes available. 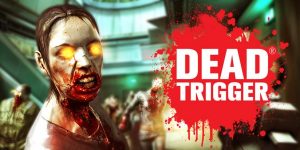 Being an FPS, the controls are pretty much the same as other shooters. Movement, camera, shoot, reload – it should all be familiar if you have played any handheld shooter before. But what makes Dead Trigger so efficient is that it keeps the interface uncluttered, removing the plethora of virtual icons. There is no icon for aiming down the sights, no icon for sprinting, and no icon for jumping. What this does is it lets you focus on the shooting, instead of worrying about pressing the wrong icon. It’s all the more appropriate since in a zombie game, close quarters combat is the order of the day.

There are plenty of missions to go through, but most of them task you with surviving a wave of zombies, protecting two given points of interest, or fetching supplies. There are main missions which progress the pretty much nonexistent story, and then there are side missions which give you extra rewards. While the mission variety is limited, blasting your way through a confined linear space full of the undead is just gleeful indulgence and never gets old. There are tons of missions to complete as well, so that’s just the icing on the cake.

The two things that make this game so much fun are the weapons and the fantastic gore.
You’ll have plenty of weapons at your disposal, including pistols, rifles, and shotguns. More powerful weapons also include the flamethrower, rocket launcher, and so on. Each weapon has its own damage, accuracy, and range scores, and each one can also be upgraded. Weapons are really fun to use, and also give you a sense of power and control seldom seen in shooters. Walking through a level with a shotgun in hand will make you feel absolutely indestructible, just like it should.

Along with the weapons are some items which can be used, such as bandages, grenades, and even baits. As you level up and rank up, more powerful weapons and items will also be unlocked. Some of the more ridiculously overpowered items include turrets, slow time, laser cutters, and so on. Ranking up also increases the number of zombies you face, complementing your arsenal.

Gore is something Dead Trigger has just no shortage of, and that’s a really good thing. Headshots feel awesome as heads burst in a shower of blood and guts, and close range shotgun shots blow the undead up into chunks of bloody red meat. These gory details simply make every bullet you fire worth it. I spent most of my time dismembering zombies, sometimes even forgetting the objective at hand.

Continuing their trend of delivering eye popping visuals, Dead Trigger’s presentation is spot-on spectacular, and it is drop-dead gorgeous. The visuals are polished, the lighting effects are impressive, and there is even a decent amount of physics at display here with the ragdoll effects. Every pixel of Dead Trigger screams console quality, and that makes the experience so much more enjoyable.

So, all of this content for $0.99? Something sounds off, does it? Well, that’s because there are the indispensable and dreaded In-App-Purchases (IAPs). Thankfully though, Madfinger is more than generous with its end-level rewards. Most levels can be completed without spending any money, although the more powerful weapons and items can only be purchased by spending real money on in-game money and gold. This is not all as bad as it sounds, since given that the app itself is only a dollar, you won’t mind spending a little more.

Dead Trigger is an excellent FPS which comes wrapped in a layer of brilliant graphics, exciting missions, tense shootouts and delicious gore! For $0.99, this one is destined for greatness and is an absolutely brainless purchase. Go, have a blast.