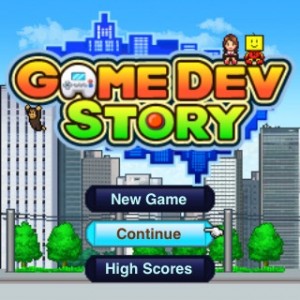 The iPhone business sim Game Dev Story gained a lot of popularity with gaming blogs earlier this year. We thought we’d try our hand at the game and see what all the fuss is about.

Game Dev Story is a simple concept: you are the CEO of a fledgling video game developer, and your goal is to become as successful as possible. As the CEO, you control the hiring and firing of employees as well as what kind of games to make and what consoles to make them for. All of your decisions are made via the touchscreen menu interface.

The menus are nested in a way that it only takes a couple pushes to get to where you want, making the process pretty quick. Once you’re ready to develop a game, you use the interface to select a console (sorry, no multi-platform releases) and then select a genre (RPG, Shooter, Racing) and type of game (Fantasy, War, Mystery). If your combinations fit well together, your game will sell better and be easier to develop.

Certain combinations will also cause the types and genres to level up, improving the overall quality of games in that genre and give you bonuses that can be spent on choosing the game’s direction (improved realism, polish, etc.). So, the more quality games you make in a certain genre, the easier it is to make better versions of those games.

Once you begin producing a game, your employees will work on four areas: fun, creativity, graphics and sound. Each employee has different levels of skill that contribute to the four areas, and more skilled employees will raise those scores higher than less skilled ones. There are also three chances to boost your game’s attributes: When you start the project, you write the scenario, offering boosts to fun and creativity. At 40% complete, you begin developing graphics, and at 80% you develop the sound. 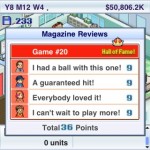 Once the game is completed, a panel of four reviewers will grade your game, and if your score is high enough, you’ll earn “Hall of Fame” status for the game. If a game reaches that level, you’ll be able to make sequels for it. The nice thing about making sequels is that your sequels start out with boosted scores in the four developmental areas.

Occasionally, the programmers will makes coding mistakes that create bugs in your game. Once the game is done, you have the option of fixing the bugs or releasing the game with mistakes. While releasing a game without bugs is faster, it can affect sales and people’s opinion of your company and game. As you fix bugs, you will gain research points; sometimes, you’ll also get them when your programmers consult each other while working on projects.

These research points can be spent in two ways. First, they can be used to level up your employees, increasing their skills but also increasing their salaries. Leveling your employees is important for unlocking the hardware engineer position, where you can create your own console. Second, the research points can be spent on boosting a specific attribute of your game.

If you don’t have the money to produce a game, you can earn some by doing contract projects. Projects require you to get certain amounts of points in the four areas to complete them, and you only have a limited time to finish them. While they don’t net you as much money as completing a game, these project can give you a little boost if you need it.

Game Dev Story is a parody; so, it features a few annual events that are based on real life with their own little spin. There is an E3-like even where you can hire booth babes and celebrities to help improve your standing with fans, and there are annual game awards that you can win against competition like “Round Phoenix,” “Intendro,” etc. The consoles are also spoofs of their real counterparts: IES and Super IES from Intendro, the Sonny PlayStatus, and more. Even some of the employees you can hire have names based on famous celebrities. 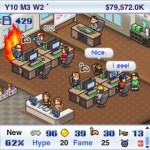 You have 20 years to run your company before the game stops recording high scores in sales and profits. At that point, you can continue playing with your current company or start a new one, retaining your genre and type levels as well as your development points. Everything else starts over, but the few carry-overs make your next company a lot easier.

The graphics are very basic, you spend all your time in the office looking at simple character sprites. Game Dev Story’s simple backgrounds and character designs aren’t going to amaze anyone, but they are good enough to inspire some nostalgia for older gamers. The music is also about what you would hear from 16-bit games, but there is also not a lot of variety in the sound department. So, eventually you might get tired of hearing the same few sound effects and the same music after a while.

Game Dev Story is simple yet amazingly addictive. Once you spend a few minutes on it, it’s hard to put down. The way the game flows, you’ll find yourself wanting to just start one more project over and over until you finish the game…or your iPhone’s battery runs out. For just a few bucks on the app store, you can easily squeeze a few hours of gameplay out of it. This game is definitely worth picking up if you enjoyed old business sims like Aerobiz, but with such a low price, just about any iPhone gamer should give it a try.