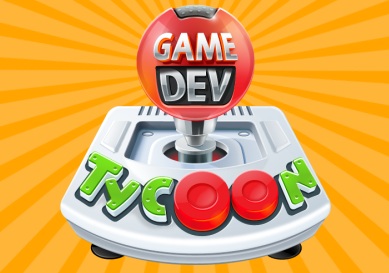 Greenheart Games’ Game Dev Tycoon got a lot of its press from their creative anti-piracy technique, but does this game-company simulator live up to the hype?

At first glance, Game Dev Tycoon looks like a clone of Kairosoft’s Game Dev Story, which we reviewed back in 2010, but there are differences, some for the better and some for the worse. For the better: a more in-depth game creation process; for the worse: a sometimes esoteric formula for the success of your games. In Game Dev Tycoon, you begin your company working alone in your garage in the early 1980s. You have a basic knowledge a handful of gaming topics (e.g., Fantasy, Medieval, Space, etc.) and genres (e.g., RPG, Adventure, etc.), and from there, your goal is to build your company into a AAA-game-making empire. As you develop games and take on contract jobs to make money, you’ll be able to grow, but you’ll also acquire research points.

The research points are used to expand your company in a variety of ways. They can be put towards expanding the list of game topics you can create, adding to your knowledge of hardware and software, or, once you have some employees working with you, they can also go towards training and improving your team. Researching new hardware (e.g., steering wheels), software (e.g., 3D graphics) or game-related (e.g., branching storylines, day-night cycles) upgrades can’t be used right away, though. Instead you’ll have to invest a good chunk of your company’s money into creating a new game engine that has all of these bells and whistles, making advancement sometimes an arduous and expensive process, as you can’t be creating a new game if you’re working on an engine. 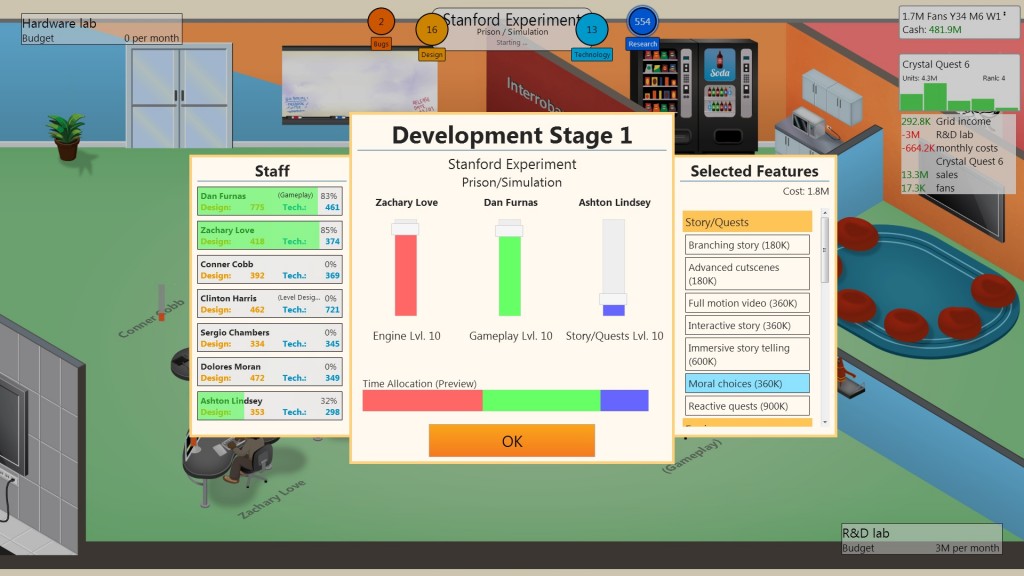 Of course, creating the games is really what Game Dev Tycoon centers on, and that’s where you’ll devote most of your brainpower (and virtual manpower). In order to create a game you’ll pick your topic, genre and gaming platform, and once unlocked you’ll also be able to choose a target audience for the game, what game engine you’d like to use, and how big the game’s size and budget will be (small, medium, large or AAA). Console and company names are all references to real entities and roughly timed to their real releases. You start with the Govodore 64 and the PC and move through the Ninvento TES up to the Vony Playsystem 4 and Micronoft Mbox Next. While the game eventually lets you mix genres to create action-RPGs and such, there is a major oversight in not allowing for multi-platform releases.

Once development begins, you’re given a chance to decide how time is allocated on the game, which will determine if the title thrives or fails miserably. Do you put your time into graphics or sound? Dialogue or gameplay? In Game Dev Tycoon, you can’t have it all, and the ratios of time spent are quite important. On larger games, you’ll also be able to assign staff to specific parts of the project and their personal skills will further influence the game’s results. As the development process goes along, your game will rack up points in design and technology, but just having a game with big design and technology points does not guarantee a success. Once a game is completed, you receive four review scores from outlets such as Informed Gamer, which determine a large part of how well your game will sell. Sales can also be helped by other factors such as advertising and going to G3 (their version of E3), but without good reviews, your game won’t get very far.

Unfortunately, the algorithm for success is not readily apparent within the game itself. Yes, seasoned gamers will know that world design is more important for a fantasy RPG than for a casual rhythm game, but finding the right balance can be frustrating at times. Reviewers rarely give helpful feedback, as “Quirky, but fun” seems to pop up far more often than “Their focus on Level Design served this game very well”, so it can lead to a lot of trial and error for new gamers. Well, either that or giving in and looking up the algorithms on the ever-expanding game wiki. Until you can really find that balance, don’t be surprised if you find yourself stuck as a small company or going bankrupt within the first 15 years or so of the game. Once you get the hang of the system, though, having this control over the development process makes for a more fun and intricate system than Game Dev Story.

Interestingly, graphics and sound, which Game Dev Tycoon considers highly important for the simulation games you create, seem to fall a bit flat in the title itself. As your offices expand, you’ll move from having a garage with a DeLorean and a Pong poster to fancier offices with new computers and updated posters, such as Okami (called Wolf in the game). This is a nice touch, but really the only charm that these graphics offer. The settings and the menu interfaces all start to feel very bland and static. No one ever gets up and moves around, and there are never any visitors to the office to break up the visual monotony. The soundtrack suffers from its own form of monotony, as well. There are only a few short phrases of music that repeats throughout the game, only punctuated by the pops and dings which sound off during development. While it isn’t repulsive, the lack of variety means you’re probably better off listening to your own soundtrack as you play.

While Game Dev Tycoon improves upon the actual game development interface of Game Dev Story, it fails to capture the charm that made the Kairosoft title so damned addictive. Game Dev Tycoon is good for those who really like to dissect and tinker on their own, but if you want any real feedback to make yourself a better player, this one might get a little frustrating for you.