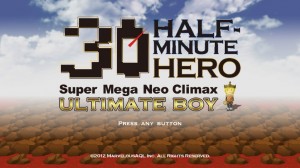 Handheld gaming is great for many types of games. You have your pick-up-and-play experiences, your games that require a lot of grinding, and anything in between. The PSP cult classic Half Minute Hero managed to combine these two extremes, creating a fast-paced RPG world that is not only very self-referential and hilarious, but requires you to save the world in just 30 seconds. Now, coming to PC via Steam, Half Minute Hero: Super Mega Neo Climax Ultimate Boy takes two records: most unnecessary adjectives, as well as most fun JRPG on Steam. 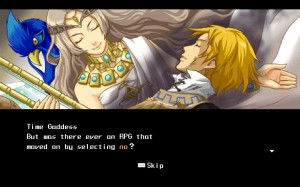 Half Minute Hero PC’s main quest, Hero 30, follows a young adventurer who must stop an Evil Lord from casting a spell that will destroy the entire world. Unfortunately, the spell is fast acting and only requires 30 seconds to cast, so the adventurer must make a deal with a Time Goddess. Doing so allows him to spend money to rewind the clock, thus making 30 second quests take as long as you can afford. An important distinction to make is that this does not mean the game plays slowly. On the contrary, battles are seamless and rapid with no need for button presses, and your character zooms around the overworld quickly. You can also run (either in the field, or in battle to get to your enemies quicker), yet you must sacrifice your own HP in order to do so. Once you defeat the Evil Lord, another one replaces it. And another one. And another one. Thus is the flow of the game; quest after quest of increasingly challenging time attacks.

There are other NPCs that you will meet over the course of the game, including party members, store owners, and mini-quest givers. There is a significant amount of content in Hero 30 that will keep you coming back for several hours. Not only is it addicting, but the game records the amount of time you actually spend completing the level. You can always replay a level in an attempt to shave a few seconds off of your score, or compete with your friends (or globally) in a highly-competitive leaderboard. You’ll be surprised how much faster you can complete a stage upon a second, third, or fourth playthrough, which will always keep you coming back for more. 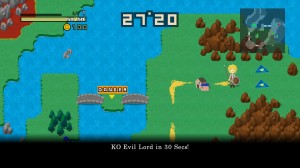 Aside from Hero 30, there are, of course, other game modes, each of which has been fully fleshed out. There are Hero 3 and Hero 300 which are self-explanatory, however there are Princess 30, Evil Lord 30, and Knight 30 as well. Princess 30 is a fast-paced shmup where you control the Princess who must leave the castle for the first time. She is joined by an army of knights and soldiers, who escort her and are her artillery. You must move forward, collect an item or complete a quest, and return before the 30 seconds are over – destroying everything in your path. For some reason this mode seems a little less funny than the other ones, but it is no less enjoyable to play.

Evil Lord 30 is an RTS where you are simply an Evil Lord trying to mind your own business when knights and soldiers come in to ruin your day. You fend them off by summoning your monsters, who will attack in the direction that you send them. It’s definitely full of deep mechanics, and is my favorite mode in the game. Knight 30 is actually a mode based around my least favorite type of gameplay: you are to defend an ally for a set amount of time from waves of monsters. Unlike tower defense gameplay, when any enemy lands any attack against the Sage you are to protect, the timer increases more, which can lead to increased frustration. The mechanics are smooth, but it’s just not something that clicks with me; I asked a close friend who enjoys that gameplay style to play a few levels of it, and they walked away praising it, so make of that what you will. 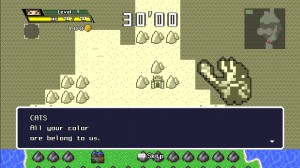 The game also features online multiplayer through Steam where you play Hero 30 in a race to complete your quest before two other opponents. The mode plays great, but I’m still disappointed due to the inability to specifically play with your friends; all match-making is random. The game also allows you to switch between two different art styles, which is good as while the “New” art style is more polished and fluid, some will certainly prefer the “Classic” art style only. The soundtrack does not change with the art style, but has music that is strong with both portrayals of the game world.

I don’t want to put too much emphasis on my problems with Knight 30 and the Multiplayer though, as the Half-Minute Hero: Super Mega Neo Climax Ultimate Boy truly is incredibly strong – especially given the $9.99 price tag. If you are a fan of pick-up and play mechanics, RPG mechanics, RPG spoofs, comedy in games, shmups, RTS’s, or just about anything else, this game will certainly satisfy your cravings for some time to come.

Full disclosure: This game was reviewed using a copy provided by Marvelous AQL.