The Inazuma Eleven series has been around Japan and Europe for several years now, but the game series never made it stateside until now. Level-5 has decided to finally test the waters in the United States with a 3DS eShop port of their original title. Americans aren’t necessarily known as huge soccer fans generally, but how does a game that combines the original football with RPG-style character building and storytelling fare?

Inazuma Eleven follows the story of Mark Evans, a junior high school student whose passion in life is soccer, a passion he got from his late grandfather. He’s the captain of Raimon’s soccer team and also serves as their goalie. When the game starts, Mark’s squad is less than enthusiastic about practicing and competing, until former soccer star Axel Blaze transfers to their school. Unfortunately for Mark, Axel has sworn off soccer due to a horrible accident (which is also the impetus behind Axel’s transfer to Raimon in the first place). Shortly thereafter, Raimon is challenged to a match by Royal Academy, the best team in their region, and Raimon is soundly crushed until Axel reluctantly steps in. With that, the Raimon soccer team starts their journey towards winning the national soccer championship, but along the way, the team runs into an array of liars, cheats, and thieves, and just like any good shounen storyline, Inazuma Eleven focuses on how teammates come together and support each other to overcome those adversities. 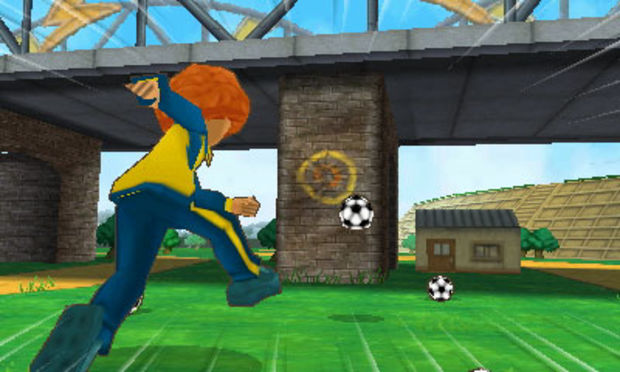 Inazuma Eleven is an interesting twist of sports and RPG gameplay. You fight random battles like an RPG, but these take place as 4-on-4 soccer games with objectives ranging from scoring a goal to keeping the ball away from the other team for a set amount of time. Each victory rewards the team with experience points, prestige points and friendship points. Experience levels up your team, improving their stats and giving access to new on-field skills such as the ability to set the ball on fire to make it harder for the goalie to catch or the ability to pull a chunk of the ground up, preventing opponents from dribbling past your defenders. Prestige points are the currency of the game, used to buy equipment, new skills, and recovery items, while friendship points are used to recruit new players to improve the team. The control scheme is a little awkward at first, as players are directed to run, pass, and shoot using the stylus while the overhead camera is scrolled using the control stick or d-pad for right-handers or A,B,X and Y for lefties. Fortunately, the controls only take a few battles to get used to, and it’s not hard to get the idea down by the time the first major match rolls around.

The major games against other tournament teams are 11-on-11, like real soccer matches, with two halves, overtime, and then penalty kicks, should it come to that. Outside of the existence of superpowers, the matches follow most soccer rules, having fouls, offisides penalties, corner kicks, and the like. You can change your formation and substitute players after each goal, penalty or turnover, or by calling an on-field timeout, allowing you to switch between offensive and defensive formations based on the current game situation. This kind of micromanaging isn’t needed early on in the game, but if you’re facing an end-game opponent and aren’t leveled up enough, it can swing things in your favor. This is especially true if you want to take advantage of the elemental system; each character represents one of four elements, with strengths and weaknesses against others. Keeping these balanced can make your life a lot easier during matches, too. Once you beat a team, you can schedule friendly practice matches against them for more experience and even recruit some of their players to come to Raimon and join your own team.

As the story progresses, you’ll also unlock the ability to practice against other local clubs, and you’ll find locations around town to practice specific skills (kicking, ball control, stamina, etc.). However, devoting time to practicing really becomes beneficial once the Flash Training facility opens up. There, you can level up attributes for your entire team at once, making it much more efficient than training each player individually. Inazuma Eleven does offer a little bit of post-game bonus as well, like being able to face-off against characters from another game series (No spoilers about whom, though!) as well as access to new skills, players and matches. 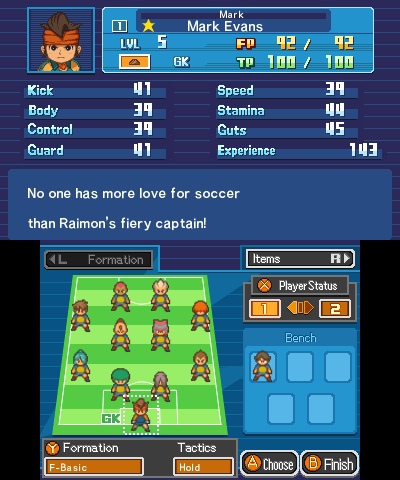 Being a port of an original DS game, the graphics are somewhat mediocre at times, and the game doesn’t take much advantage of the 3D option. Most of the action takes place on the lower touch screen, with the top screen showing the score unless a goal is scored or a supermove is being used (both of which feature a very mild 3D effect). For most of the game, the characters are depicted as rather simplistic sprites, detailed enough to be able to tell them apart by their various physical traits (Jack’s green afro, Mark’s headband, Axel’s spiky blond hair, etc.), but the level of detail isn’t going to wow anyone. The players look much better on the status and equipment screens, though, and the superpower transitions, while a little pixellated, don’t look too bad. In addition, the game features a handful of animated cutscenes which look much better, too, but these are few and far between, occurring once every couple of chapters in the story. The game unfortunately suffers occasionally from typesetting errors, mostly strange spacing issues that are annoying but don’t prevent you from playing.

The audio is in the same vein as the graphics, fairly middling with a few high points. The background music is mostly forgettable and standard RPG fare, though the music that plays during some of the more tense scenes does stand out. The vast majority of the game’s dialogue is unvoiced (except for the aforementioned cutscenes), but there are some snippets of characters celebrating whenever goals are scored. Unfortunately, there seems to be a pretty small pool of these clips to draw from, so if you get good and score a lot of goals, you’ll have to get used to the same celebrations over and over again.

Overall, Inazuma Eleven is a fun game for those who enjoy the likes of Super Mario Strikers or the old Mega Man Soccer, but with all the high-flying acrobatics and crazy supermoves, those who want the fidelity of a FIFA title will have to look elsewhere. The combination of the soccer battles and RPG-style character development and gameplay is a neat concept, and while the game does have its flaws, none of them are gamebreaking. There are definitely worse games you can get from the 3DS eShop.