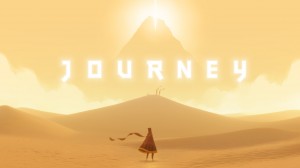 Journey, the latest title from thatgamecompany, is incredible. It was recognized as the “Best Downloadable Game” by several sites at last year’s E3, and it’s easy to see why. Although it is only a couple of hours long, the game left a vivid impression that made me want to start again immediately. Each time you play (and believe me, you’ll want to play it more than once), your adventure will show you something a little different. With its emphasis on emotion and aesthetics, Journey is an experience that no one could easily forget. Journey, along with Flower and flOw, is part of a three-game deal that the studio had with Sony, so it is a PSN exclusive.

At the beginning of the game, you find yourself alone in the middle of a vast desert with a distant mountain as your goal. However, one of the best things about Journey is that you don’t have to travel there on your own. As long as you’re signed in to the PSN, you can encounter other players in any level. There’s no way to speak to them, but pressing the circle button produces a musical note that the other player will hear, which is more than enough to communicate. Playing a note also releases a sphere of light that surrounds your character, which can help you and your fellow travelers find each other.

The travelers you meet will definitely change your experience every time. Some people might want to rush through the level to get to the end, and if you want to keep up with them, you have to sacrifice exploration. At times, you might encounter a player who knows where certain secrets are hidden within the game, and that person will lead you to things you haven’t seen before. After you’ve uncovered these secrets, maybe you’ll meet someone who has never played, and then you can pass your knowledge on to them. You can even tell how many journeys a player has made by how elaborate their cloak designs are. 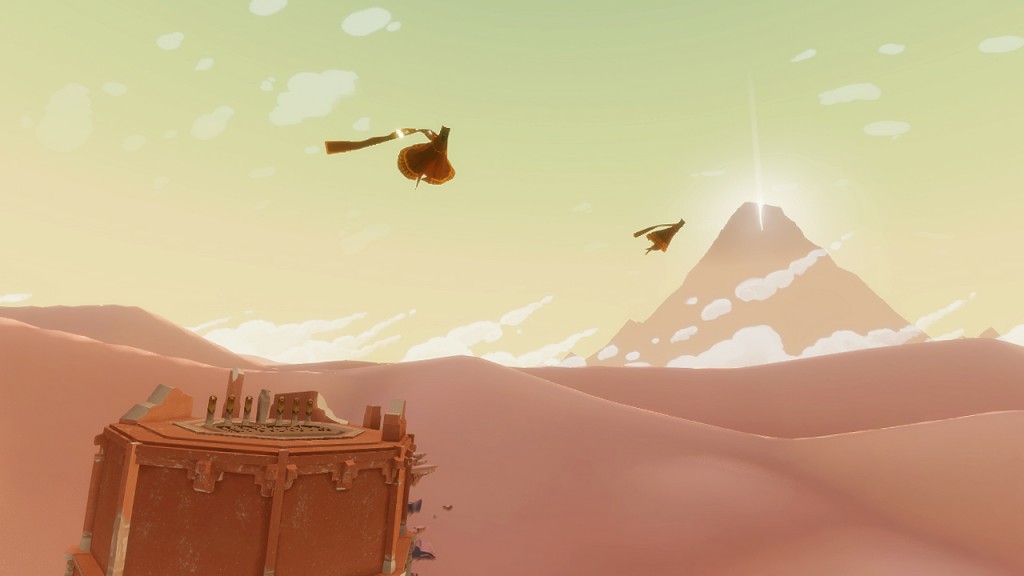 However, the social aspect of Journey is more about experiencing the world together than finding and sharing game secrets. It manages to evoke an emotional response in a way that few other games can. I met companions on every level I played, and it felt so important to work together that I became attached to them. Any time I lost track of someone in a level, I would press the circle button to let them know I was still around and head their way when I saw a light in response. The spheres of light are more than homing beacons, though. They can recharge your companion’s scarf, which is what lets players fly. Since your scarf’s length determines how long you can fly, there were times when I couldn’t make it high enough to get somewhere. When that happened, the person I was exploring with would use their light to let me keep going. That’s part of Journey‘s beauty: it makes you want to help the people you meet and do everything you can to reach the end with them by your side.

In addition to the emotions it inspires, Journey is also visually striking. Every level is different, and the light effects and colors never fail to create a stunning landscape. For example, in the desert, sunlight glints off of the sand to make it shine like gold. There is also a dark castle area that uses shades of blue with patches of pale light that made me feel like I was underwater. A lovely soundtrack pairs well with the visuals to make this game a true work of art. 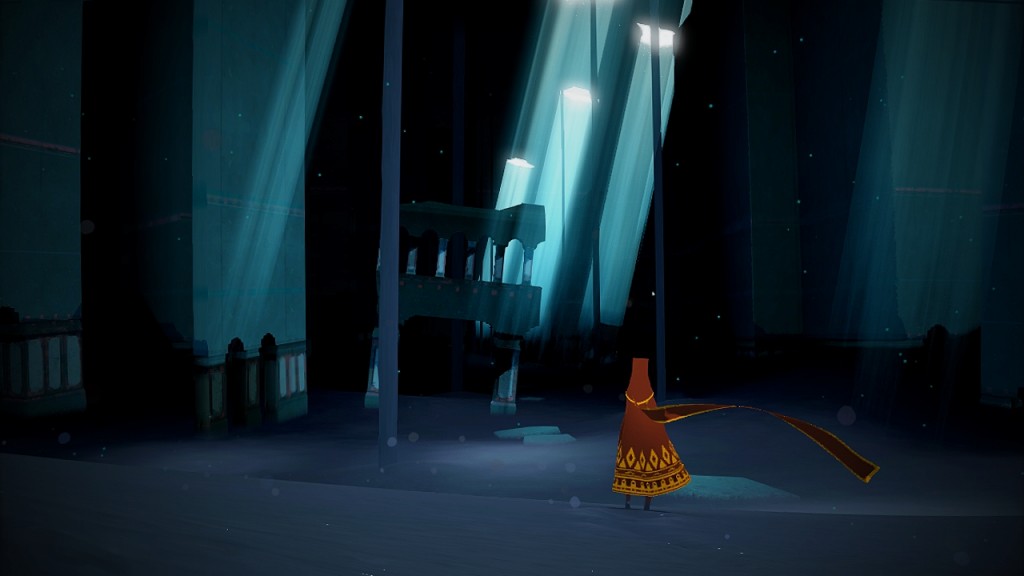 Though the aesthetics are definitely worth noting, their beauty isn’t particularly surprising. Flower was recently chosen to be part of a Smithsonian exhibit called “The Art of Video Games,” and it was clear early on in Journey that the two games share similar DNA. Both have gorgeous artwork, keep the gameplay simple, and aim to provide an emotional experience. Unlike Flower, however, Journey tells more of a story. In fact, the developers refer to the game as an “interactive parable.” From the outset, you are on an adventure to reach the mountaintop. As you travel, you make friends along the way, uncover the tale of an ancient civilization, and discover more about yourself.

Journey‘s ability to inspire wonder is accentuated by its simplicity. Even someone who has never played a game before could probably learn the controls easily. Walking and flying are the only movement options available. The one thing that could cause some difficulty is tilting the controller to adjust the camera. It’s not hard to get used to it, but that isn’t even necessary. The game allows you to use the analog stick instead, which I found much easier.

If you liked other titles from thatgamecompany, then you’ll love Journey. No matter what type of game you usually play, this one is definitely worth experiencing. I enjoyed both of my journeys so far, and I can’t wait to start a new one soon.