The Katawa Shoujo project began in 2007 when a group of people from 4Chan’s /a/ board saw a one-shot doujin picture. The picture, drawn by Japanese artist Raita in 2000, depicted a group of girls with different disabilities and described a theoretical visual novel about them. That single file launched a five-year project that finally came to a close on January 5, 2012. Katawa Shoujo was built using the Ren’py engine, an open-source system for creating visual novels. Back in 2009, I reviewed the Act One demo, and like many, I have been waiting for the full game since then.

The game has received some flack for the choice of name, which was taken from the original drawing. For those who don’t speak Japanese, かたわ少女 (Katawa Shoujo) carries a somewhat derogatory connotation. The title, which is often translated as “Disability Girls” is perhaps more accurately translated as “Cripple Girls.” However, if you can look past the game’s name itself, you’ll find a surprisingly well-made game.

The story of Katawa Shoujo opens with Hisao Nakai, an high school student waiting for a girl after school. Just as he gets tired of waiting, she arrives and confesses her feelings toward him. Unfortunately, before he gets a chance to answer, Hisao collapses in pain and passes out. He awakens in the hospital, where you learn that he has had a heart attack brought on by an undetected arrhythmia. After a lengthy hospital stay, he’s finally allowed to return to school. Unfortunately, it isn’t his own school, but rather Yamaku Academy, a school that primarily accepts people with disabilities. Each complete story arc is broken into four acts and covers about 3 months of game time, though there are a few premature bad endings that will occur if you make the wrong decisions. 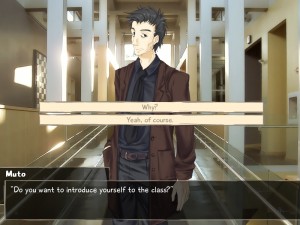 The game is a pure visual novel with no quick time events. For those who have never played one, it’s like a computerized choose-your-own-adventure novel. To progress the story, you are occasionally given sets of two or three choices on how to proceed. Typically, they are fairly opposite: Either you lie or tell someone the truth, you go running or stay in bed for some extra sleep, etc. So, if you’re looking for a game with shades of grey, you’ll have to keep looking. Even so, the branching path system that is created by these systems provide a chance to see quite a few different storylines and provide hours of replayability, with the added bonus of skipping text you’ve previously seen if you so desire. Each storyline occurs in its own little reality; so certain things that happen in one line may not happen at all in another, but major events such as the school festival and track meet will occur no matter what choice you make; so, if you’re not involved, you still hear about them tangentially in other routes.

As you progress through a route with each of the girls, you may find yourself involved in some sexual situations. These scenes can be shut off if you don’t want to see them but still want to enjoy the fairly well-written story. If you do choose to keep the scenes included, they do not come off as exploitative of the character’s conditions. In fact, some of the routes effectively use these scenes as a means to further develop the characters and their relationships, and except for one scene that seems to be included for the sake of humor, all of the scenes are done with a serious and emotional tone.

During the first act, you get a small taste of each of the main female character’s personalities, but starting in act two, you get a chance to concentrate your efforts on learning more about one or two of the girls. Each girl has some form of personality flaw ranging from Shizune’s overly-competitive and manipulative personality to Hanako’s severe social phobia. Each girl also displays some fear of intimacy, which given their ages and situations, is not too unusual. Unfortunately, because you control Hisao’s decisions, his character is somewhat malleable. As a result, he comes across as a different character in different storylines. This may make him seem like a weak character at times, which may frustrate you in certain game situations. 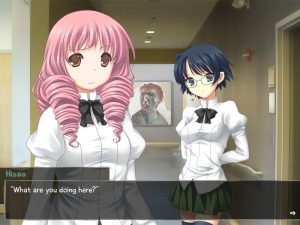 Even though the game is not a product of Japan, the character designs are clearly influenced by Japanese anime and manga style. All of the characters who appear in dialogue appear distinct with no chance at confusing them, which is something not even professional anime and manga artists pull off 100% of the time. Of course, those with physical disabilities are a bit more distinct than others in the supporting cast, but the presentation of these characters is not done in a grotesque or tasteless way. If anything, the disabilities are slightly underplayed as compared to their appearance in real life. Speaking of real life, the background art is done in an interesting and unique manner. The backgrounds were created by taking real photos and passing them through photoshop filters and then touching them up. The result may be slightly jarring at first when compared to the style of the character art, but once you become accustomed to it, it actually creates a pleasantly distinct visual feel within the game… with the exception of that one painting hanging in the hallway.

There is no voice acting in Katawa Shoujo, which may be a turn off to some, but it is a better option than doing it poorly. Terrible voice acting can ruin your enjoyment of a game, and this one can stand on its own without any voices at all. There are over 30 music tracks that play throughout the game, though some of them do sound similar at times. Even though there are no voices to cover them up, none of the tracks jump out at you as amazing, but they are more than adequate for setting the mood of the game. Considering this is a free title worked on by a group of amateur creators, they did manage to do a good job on the audio.

4 Leaf Studios definitely put their blood, sweat and tears into Katawa Shoujo and their efforts have come together to create a great independent visual novel. While the game isn’t without its flaws, it does a great job of creating a tasteful and emotional story that centers on a very contriversial topic. Perhaps the biggest downside about Katawa Shoujo is the fact that 4LS has said that this is probably their first and last game together. After coming this far and learning what they have, they would be a force in the visual novel genre. Instead, they must simply be an inspiration to others.